Dave Levage was not the highest bobbing buoy on the bay. In addition to a serious drinking problem he was a terrible judge of character and an unconvincing frequent liar. By his mid 20’s he had a lengthy criminal record, no legitimate job or income and a habit of turning on his friends. He brought all of his tools to the events of April 2nd and 3rd, 1977.

On a busy Saturday night at the Top of the Ocean restaurant on the Old Town waterfront, Levage showed up in the bar noticeably intoxicated. After being asked to leave several times he finally wobbled out after midnight and took a cab to either his own home or that of his former wife-the story changed later in the courtroom. 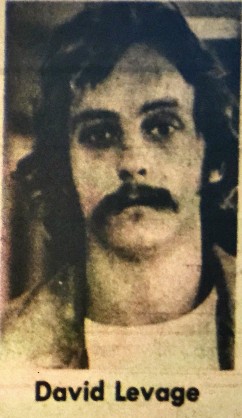 Early on the Sunday morning of April 3rd, just a few hours later, Levage called a cab to take him back to the Top of the Ocean. When the cabbie, Richard Black arrived, Levage asked him to help load several boxes into the trunk, boxes Black later recalled “sloshed” when they moved them. Back at the Top, Levage again had the cabbie’s help in unloading the liquid filled boxes.

At 6:55 a.m the Tacoma Fire Department responded to a blaze at the landmark nightspot which they found fully engulfed in smoke and flames. 12 pieces of equipment fought the fire for hours including both firetrucks and fire boats. The Top of the Ocean burned to the waterline, a total loss. The evidence of arson was obvious, including 12 empty cans of paint thinner with David Levage’s fingerprints. He was under arrest before the ruins of the Top of the Ocean stopped smoking.

Someone helped the unemployed Levage make $10,000 bail but when it was raised to $50,000 at arraignment before Superior Court Judge Waldo nobody 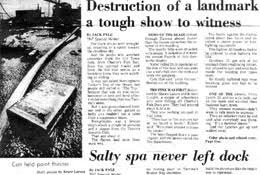 stepped up and he was sent to county jail. The first degree arson trial started on June 6, 1977 before Judge Stone and a seven women, 5 men jury. Levage pleaded not guilty and then took the witness stand with a rambling account of why he bought 8 gallons of paint thinner two days before the fire, how he was seen entering the restaurants furnace room to pick up and sell a boom box to a mysterious stranger early that Sunday morning and how his memory was clouded by a recent skull fracture. Experienced crime reporters covering the trial were perplexed by his own attorney’s questions and the disjointed version of events presented to the jury.

The star witness however was the cab driver Richard Black who had no doubt about Levage’s identity as the man he took to the Top of the Ocean on the morning of April 3rd along with several boxes of liquid. It took the jury a little over an hour to return a guilty verdict.  Two weeks later he was sentenced to a maximum of 20 year in state prison for the Top of the Ocean arson. It was probably the luckiest day in David Willard Levage’s life.

The story behind David Levage’s actions in early April 1977 was much more complicated than anyone knew at the time. In the months to follow, the arson fire investigation at the Top of the Ocean would lead to the offices of Pierce County’s most violent and entrenched organized crime bosses . It would also lead to the offices of the County’s most powerful law enforcement officials. That story is coming in Top of the Ocean, Part 3…….