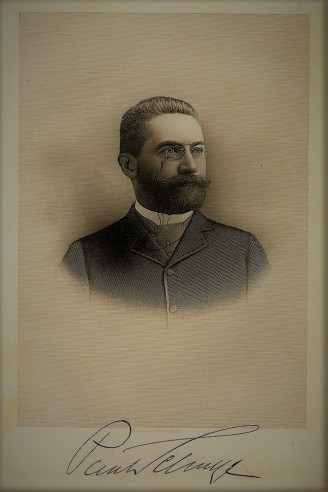 the son of a Hapsburg baron.

He immigrated to the United States from Germany just after the Civil War and made his way west with the push of railroads to the Pacific. By 1871 he was in Portland working anonymously for the land office of the Oregon and California Railroad but on a visit home to Bavaria he had the good fortune to meet Henry Villard who would soon become president of the O&CRR. Villard was no doubt making one of his trademark swings through the European aristocracy pooling investors for his land grant railroad enterprises. Villard took the twenty something Schultze under his wing and groomed him in the soaring business of building railroads in exchange for free land and then cashing in on real estate development.

Schulze was made the land agent of Villard’s Portland transportation interests and in late summer 1881 Henry Villard pushed aside Charles Wright and took control of the  Northern Pacific Railway. It was an ominous turn of events for Tacoma.

The arrival of the Northern Pacific Railroad at Commencement Bay in the winter of 1873 established Tacoma as the Pacific Ocean terminal of the transcontinental line. In the mind of Charles Wright, Tacoma was destined for great things, among them surpassing Portland in importance as the great city of the Pacific Northwest. Health problems for both Wright and the finances of the NP stalled the aspirations of the City of Destiny and when Villard took control he made no effort to conceal his proclivity for Portland. It was under the dark Villard cloud in 1882 that Paul Schultze appeared in Tacoma as the new NP Land Agent. He was not warmly welcomed. 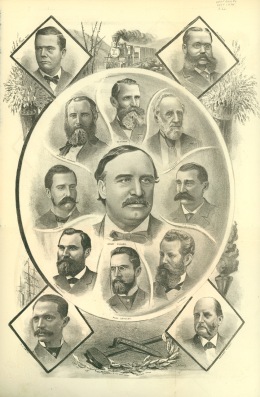 Schulze brought a lofty, aristocratic determination to his new job. While his boss Henry Villard obstructed the direct route over and through the Cascades into Tacoma (bypassing Portland), he dutifully sold NP property tracts, underwrote new streetcar lines and fell in with the local boosters and industrialists. When Villard and his investor syndicate were ousted by the NP and Charles Wright stepped back in to complete the Stampede tunnel and usher in Tacoma’s sunniest boomtime, Schulze kept flying higher.

Leaving his Villard loyalties behind he made the acquaintance of tunnel builder Nelson Bennett and invested his own money in Bennett’s Tacoma Railway and Motor Company and the Yakima & Kittitas Irrigation Company, both enterprises that were byproducts of the Cascade tunnel Villard fought so vehemently.  When William Ross Rust showed up in Tacoma with plans to build a copper smelter in 1889, Schulze invested, eventually becoming Vice President of the Tacoma Smelting and Refining Company. That same year

he began building an elegant mansion for himself and his wife Katherine on Allen C. Mason’s new Pt. Defiance streetcar line at 1012 North I Street.

Unexplainably, Schulze lived in the fashionable Stick style mansion, with its grand porch overlooking Commencement Bay, for just over a year before he began building a still larger, more imposing manor house at 6th and Yakima Avenue. When the new Schulze house at 601 Yakima was opened for a housewarming party in November of 1891 none other than Henry Villard and his wife were in attendance. And Paul Schulze was not just building imposing mansions in the North End. Financed by the NP and a pool of investors behind his old patron Henry Villard, he was literally overseeing the construction of a new seven story Tourist Hotel on a rocky outcropping above the NP Wharf. But it was all too much.

He began to use his private, richly panelled and furnished railroad car for lavish personal trips to San Francisco returning with artworks, silk carpets and fine porcelain for his increasingly ostentatious Tacoma home. His household included day and night servants, a chef and kitchen staff and secretly, a coterie of private detectives that provided both surveillance and protection. In 1892 he rented a house for the prominent San Francisco actress Marie Wainwright and her daughters and after being seen in their company several times over the summer, Mrs Schulze procured a divorce. When the national economy took a hit in 1893 and the NP began to investigate to their internal transactions there was a problem with the Tacoma division books-a big problem.

Over the course of the next year an inquiry into the potential embezzlement of $147,000 grew into a report that a million and a half dollars could be traced to Schulze’s personal accounts and investments. In an astonishing variety of financial maneuvers Paul Schulze had borrowed, stolen or swindled from just about every business, employer, friend and enemy he came in contact with. The stock collapse of the NP in 1893 had actually reduced the scale of his crime but by any measure his wings were melting. At the end of the year he resigned from his position with the railroad. On Thursday night, April 11th he built a blazing fire in the hearth of his mansion and sitting close to the heat, burned stacks of papers and letters from his study. The next morning he had breakfast, returned to his bedroom and put a revolver to his temple ending his 47 year life.

The almost mythic story of Paul Schulze doesn’t end there. His fall was connected in many different ways with the Tacoma that followed. On the morning of his suicide, the last person Schulze spoke to was his chef and butler, Kiyoso Henry Matsumoto, called the First Sojourner, by Tacoma’s Japanese community.

Matsumoto met and fell in love with the head housekeeper in Schulze’s household, Marie Juillerat and their wedding at St. Leo’s Church, performed by Father Peter Hylebos, was Tacoma’s first Caucasian-Japanese marriage. Kiyoso and Marie started a Fine French Laundry downtown and were pioneers in the area that became Japantown. Kiyoso preferred to sell cut flowers so their business was partly a florist shop and after adventures in Alaska during the gold rush to Nome the Matsumoto’s operated a flower stall in Tacoma’s public market. Kiyoso Henry Matsumoto lived to stand on the siding at Union Station in May 1943 where he said goodbye to his son Chief Petty Officer Henry Matsumoto Jr. before boarding a train to Tule Lake California and internment during the war. He was a gifted scholar and his lifetime of writing and collecting are an amazing record of Tacoma’s history.

The first Schulze mansion at 11th and I street became the home of Tacoma Mayor Louis D Campbell before being bought by William Rust with proceeds from the sale of the Ruston smelter. Rust, who once was a partner with Schulze, moved the house down the hill on 11th in 1907 to create a block long front yard for his 18 room sandstone mansion. The Rust Mansion designed by Ambrose Russell, was also vacated by its builder in favor of a new house on Yakima Avenue but it remains

one of the city’s foremost architectural landmarks. In 1926 the massive Schulze house, at it new address 812 North 11th, was redesigned by the Tacoma architects Sutton Whitney and Dougan. And then in 1943, it was redesigned again by Mrs. B.W. McLorinan, one of Tacoma best known woman architects. She designed and built a string of wartime homes and apartments during the early 1940’s and was the only women member of the Master Builders. The house became apartments during the war, as did the Rust Mansion and many other big North End residences. Today, the Schulze Mansion is being restored with the grand ground floor spaces, woodwork, fireplaces and stairs returned to their original character. Upstairs, where the view once admired by mayors and millionaire, is still breathtaking there will be private apartments.