So in 1949 Rhodes Department Store at Broadway and 11th “Modernized” its facade with a band of bland. This photo captures perfectly the unexplainable logic of urban renewal in pre automobile cities in the post war era. This facade faces the brand new Woolworth Building that has an equally blank upper facade above picture window storefronts. It was the beginning of a canyon of windowless walls downtown that would get really scary when the mall opened in 1963 and most of the retail bailed on the city’s downtown. By the mid 60’s, Tacoma’s downtown was a sucking chest wound and in desperation this block would be converted into the south end of Broadway Plaza in 1973. The pedestrian only outdoor mall idea lasted about a decade, left a legacy of Brutalist parking garages and escalades, and plunged the downtown into perhaps its most vacuous days.

The most dismal, almost surreal element of the Broadway Plaza effort was indeed the escalades-moving flat stairways set in florescent lit tunnels with piped in elevator musak. After a few years, the bearings on the escalators began to groan, the flourescent lights began to flicker on and off and the sound volume drifted between wierd whispers and deafening noise. On a dark rainy night being in one of the escalades was like an episode of the Walking Dead before the zombies show up. 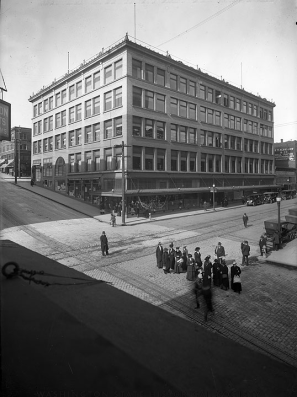 Somehow it all made sense if you think of this massive blank facade element as progress and there is no memory of Rhodes and the other big department stores on Broadway. Hilarious and so sad.