Look carefully at Walter “Pat” Patterson’s brand new 1925 Harley-Davidson motorcycle parked amid a small crowd at 7th and Pacific. This week upper Pacific Avenue will be getting a lot of attention due to new catenary lights and rain gardens but 90 years ago, in April 1925, the attraction was a slightly harebrained stunt to ride a new Harley without handlebars from Tacoma to Portland. Just to make it interesting Patterson would ride with his hands cuffed to the saddle and the bike locked in high gear. Needless to say he was not wearing a helmet. The adventure was sponsored by the Hirsch Cycle Company up on Tacoma Avenue and in fact, it went amazing well. With American Motorcycle Association referees and officials observing the whole way, Patterson made the trip with no serious mishaps and soon found himself in newspapers and Harley-Davidson advertisements all over the country. Tacoma has been the launch pad for a number of colorful schemes over the years; George Francis Train’s 1885 race around the world in 67 days, James Ashton’s near death adventure to the “Ice-Bound” Siberian Arctic in 1922, Fay Fuller’s first ascent of Mt. Tacoma by a woman in 1887 and before it all the First American Exploring Expedition’s 1841 mapping of the entire Puget Sound region beginning at a harbor they appropriately named Commencement Bay. With that harbor just behind him you get the feeling from the expression on Pat Patterson’s face that he knows he’s starting at the right place. 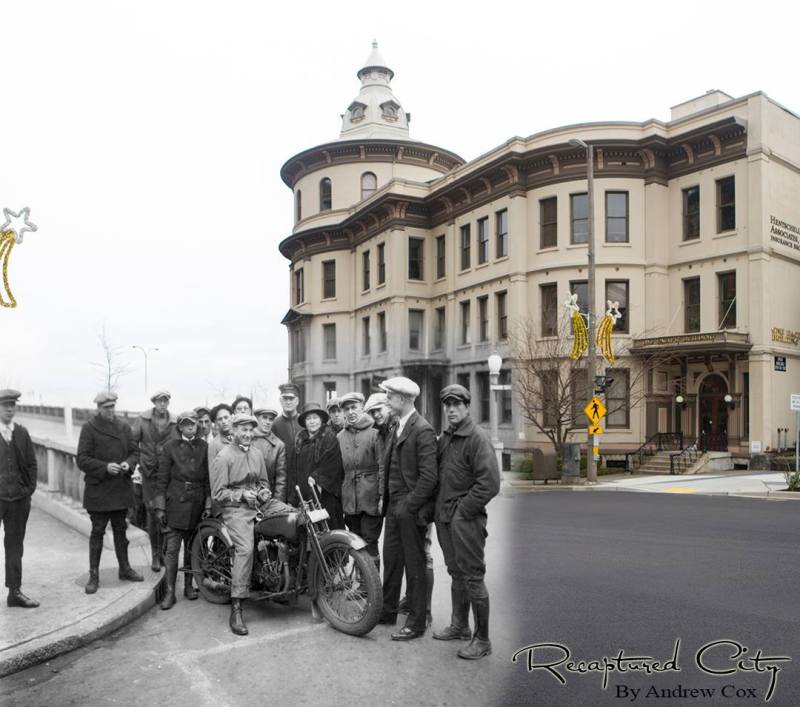 Photographer and mixer Andy Cox and I did a project that blended stories and images from Tacoma’s past. Mr. Cox was a very bright student of mine at UWT and together we got a little carried away with Tacoma storytelling. We called it Recaptured City. You can visit the entire project at:

wait for me to repost them here in the days to come.