Just finished reading “The Boys in the Boat”, a really heart pounding history of the University of Washington 8 man rowing team and their triumphant Gold Medal victory at the 1936 Berlin Olympic Games. The Third Reich hosted both the summer and winter Olympics games in 1936 with Adolf Hitler attending most of the finals. Washington State played a major role in both summer Berlin and snowy Bavaria the following winter. Mt Rainier was a major training grounds for the games with both American and Canadian athletes using the slopes and back country as a substitute for the German venue. America did poorly as usual in the winter games winning only 1 Gold medal (in bobsled) and 3 bronze.
At the 1936 Winter Olympics the Norwegian figure skater Sonja Henie cleaned up winning her 3rd Gold Medal(along with the European and World Championships). She promptly retired to a Hollywood movie career and in 1937 was at Mt. Rainier making her second film “Thin Ice” with mega star Tyrone Power. The whole film was basically written around Henie’s graceful ice skating and her inevitable romance with Powers but as a double for the skiing scenes, the studio tapped a local 18 year old Tacoma girl named Gretchen Kunigk. A decade after she imitated the Olympic medalist on film, Ms. Kunigk competed in the 1948 Winter Olympics in St. Moritz Switzerland winning a Gold Medal in women’s slalom. It was the first Olympic Gold Medal ever won by an American skier. Very cool!. 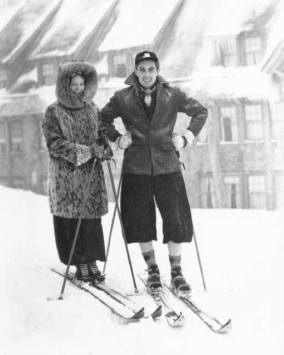 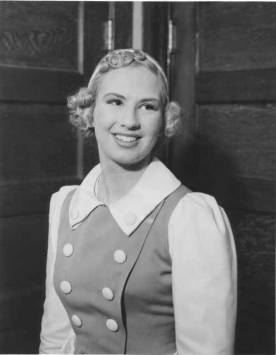 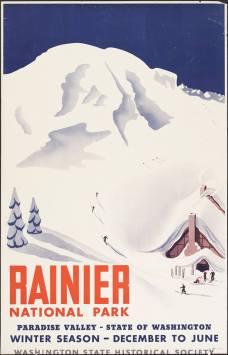