It’s worth remembering that for decades November 11th, modern Veterans Day, was celebrated as Armistice Day, marking the end of the First World War. Over the next few years, as we approach the centennial of the end of the war to end all wars, the 100 year anniversary of many dark days of that conflict will come. Though most of the fighting was in Europe, here in Puget Sound, citizens voted overwhelmingly(86%) in 1917 to buy 70,000 acres of land and give it to the Federal Government for a military base named Camp Lewis. By the end of that year more than 37,000 soldiers were in training at what was at the time the largest U.S. Army post in America.
This group portrait of the members of a veterinary field unit of the U.S. Army 346th Field Artillery, is a reminder that WW1 was a terrifying clash of not just armies but of technologies. These young men are horsemen, cowboys really, headed off to battlefields where mules and horses were planned as a central part of field mobility. They were being trained around the tactics of the cavalry charge when the reality was the grinder of machine guns, trench warfare and mustard gas. This photo was taken on September 5, 1918, just a couple months before the armistice. Maybe they never made it to the battlegrounds of France, mustered out of the army and went back to ranching.
Not sure why the other, earlier photo of Camp Lewis seems important to post today. All of these fellows likely arrived at the Great War in time to fight in the Battles of the Marne, Somme and Argonne Forest where the American casualties were devastating. But that was just ahead and on this day, for this glass plate photograph with its luminous glow and knife edge shadows, these awkward young men are learning to make bread. Still at home. 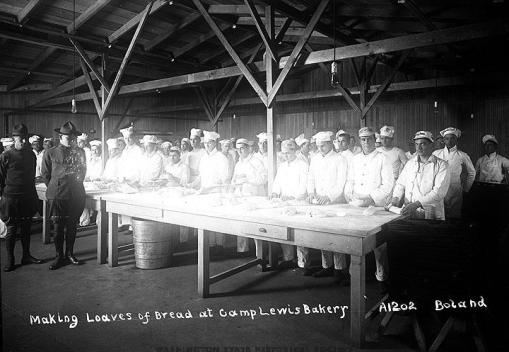