I keep coming across an amazing assortment of dreams and images of a Tacoma that never was. From the earliest Native American stories of seeing Commencement Bay as a harbor of phantoms to mind bending cartoonists that re imagine our city daily, Tacoma is a city that resists a fixed reality.

The deep magical thinking in a graphical form started with the railroad and none other than Frederick Law Olmsted’s fantastic 1873 plan for a curvilinear utopia* which in many way was realized in the site plan for the 1893 Columbian Exposition in Chicago. The Northern Pacific Railway kept coming with alluring engravings and lithographs, commissioned landscape and oil paintings that couldn’t resist exaggeration, and outright fantasies about natural features distances, development, architecture and even the climate. A favorite 19th Century  fiction were the bird’s eye views rendered by draftsmen back east showing cities they never saw in an age before aircraft from a perspective that was impossible to reach. If someone is willing to suspend reality enough to believe the sky born view the artist might as well embellish a bit and they certainly did.

And then came the tourism campaigns and the delusional Chamber of Commerce sales pitches in the form of brochures, postcards, posters and pamphlets where no direct contact with reality was required and fact checking was optional. It was sort of a civic sideshow where hawkers and dreamers got carried away, sometimes for gain and sometimes just out of enthusiasm. It goes on still.

There is a modicum of reality in all this. The magical thinking did take a material form, if only in ephemera-those works of the printer’s art that are meant to last “only for a day”.

So this will become my bucket for magical thinking about Tacoma. Here’s a sampling. More to come….

*Rotator Magazine, 2011 article on the Olmsted Plan for Tacoma below. 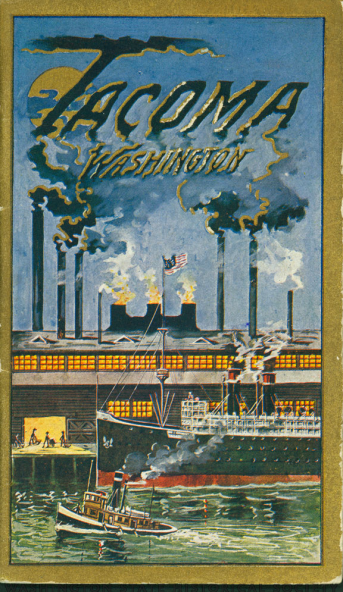 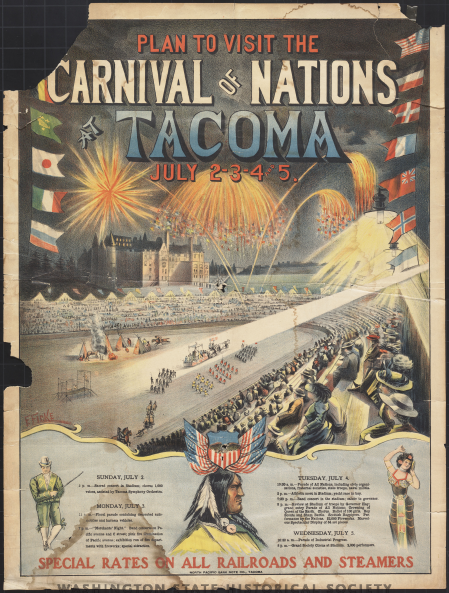 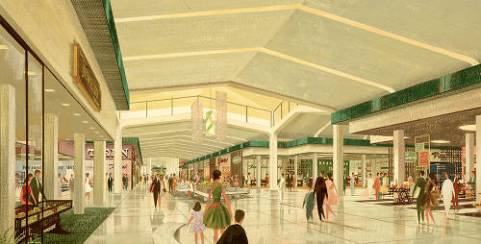 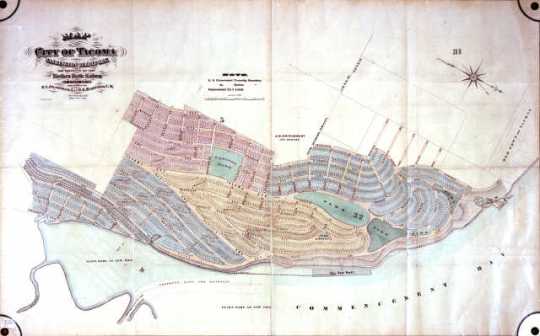 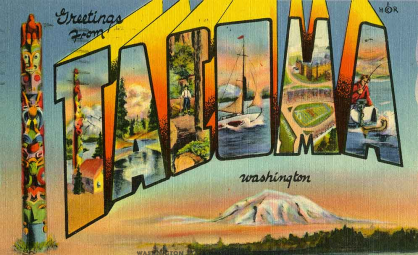 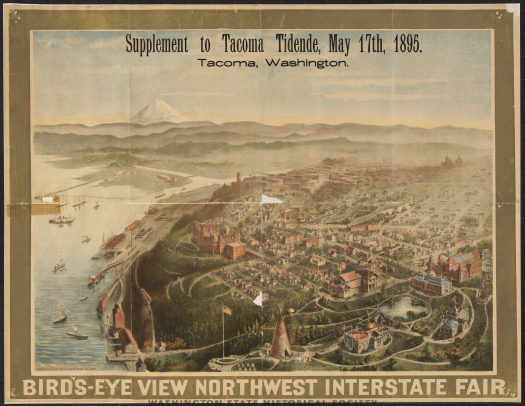 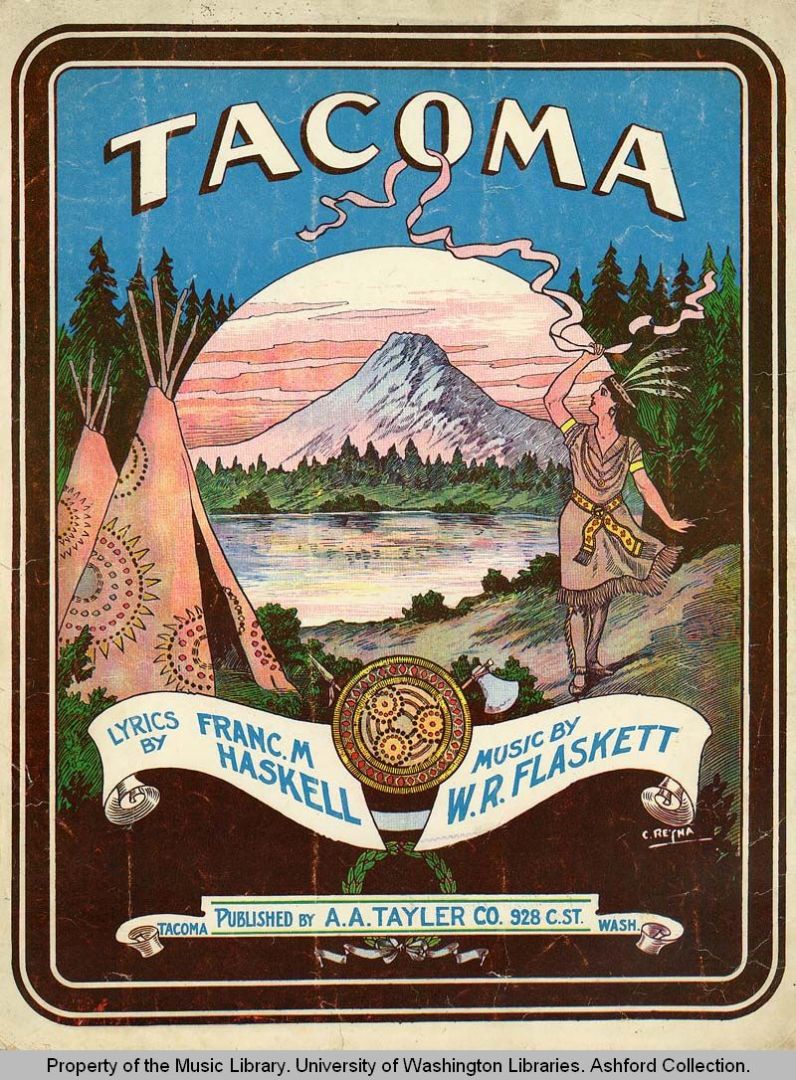 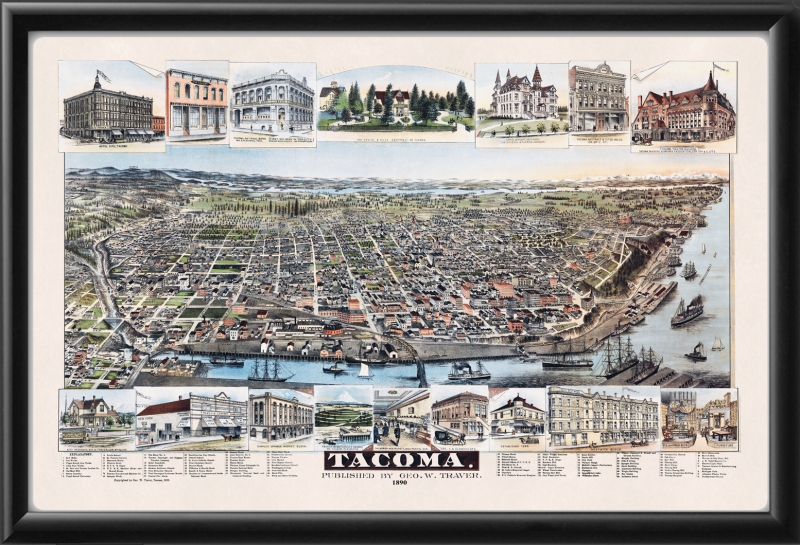 The Tacoma we see today conceals a phantom city that almost was.

In the mind of 19th Century America’s most influential and imaginative city planner, Fredrick Law Olmstead, Tacoma was to be a city born in a burst. It would be a sudden metropolis at the edge of wilderness and ocean, defined by elliptical city blocks, long sweeping boulevards and modern urban parks. From the moment he finished the plan until word reached him that his design was being abandoned altogether, only 43 days passed. No work was ever done in Tacoma that followed the Olmsted plan. No road or park was ever graded, no building ever started, no tree cut or planted. The Frederick Law Olmsted plan for the City of Tacoma existed only in FLO’s imagination, on a few sheets of sketch paper that remain in the Olmsted archives in Brookline Massachusetts and in a masterful drawing that was completed in December 1873.

Frederick Law Olmsted was commissioned on September 19, 1873 by the powerful forces of the Northern Pacific Railway Company to plan a terminal city at the Puget Sound conclusion of the transcontinental railroad. Just two months before, the Northern Pacific had selected Commencement Bay for the point where rails from the Great Lakes would reach the saltwater of the Pacific Ocean.  Although chartered by Abraham Lincoln himself in 1864 and lavished by the federal government with millions of acres of land, the railroad was almost out of money by 1873. As deadlines, debts and payrolls closed in, the railroad raced to reach saltwater by the end of the year and to convert land into cash by selling big city real estate as fast as they could.

Early Tacoma’s greatest benefactors, Charles Barstow Wright and Frederick Billings, were both on the executive committee of the board of directors for the NP and they were unsatisfied with the conventional “grid plan” city laid out by chief engineer General James Tilton. Billings was a part time New Yorker who admired Olmsted’s masterpiece Central Park and Wright knew well FLO’s innovative approach to designing railroad subdivisions like Riverside on Chicago’s outer edge. Perhaps most importantly both respected FLO’s landscape design work in California where he developed a park master plan for San Francisco and in 1866 planned the new town of Berkley, including the proposed College of California of which Billings was a trustee. Together they pressed the directors to take an entirely unorthodox turn by putting the most potentially valuable landscape they owned in the hands of a 50 year old iconoclast and practitioner of a profession that didn’t exist yet.

FLO’s first step was hardly radical. He enticed G.K. Radford , a civil and hydraulic engineer to join him in the endeavor, a clear sign that FLO recognized the complexity of the terrain and climate. FLO did not visit the site but quickly became learned enough about the setting to center his plan deep on the east facing hollow of Commencement Bay. By bending his boulevards along the contours of the hill, terracing city blocks and green spaces and facing most of the building lots toward the east he afforded the city a grand visual pan from Mount Rainier to true north.

Next FLO responded to the practicalities of his client, the railroad. He grasped the importance of grade and steepness to the operation of steam locomotives and projected the diagonal route of tracks descending the hillside onto the entire plan. Where the Tilton plan ran streets directly up the steepest sections of the hillside, FLO’s plan dodged the most formidable slopes by creating terraces or blending them into parklands. The plan, which critics said had, blocks “shaped like melons, pears and sweet potatoes”, did indeed eliminate straight lines and right angles and with them high value corner lots. But well before roads and sidewalks were paved and rainwater was directed into street drains, the Olmsted plan was seeing the landscape and native ground forms as a compliment to the city in the rain.

Perhaps the last thing FLO added to his plan for Tacoma was street and place names.  Not surprisingly his three main boulevards were Cliff, which ran longest above the shoreline and beneath the city like a chinstrap; Tacoma, which ran across the top of the hill and by Capitol Park where Statehood someday might bring a monumental government complex, and Pacific which would run through the heart of the city and bring travelers to a dramatic overlook of its namesake ocean. In so many ways it was all so perfect and so impossible.

On the last day of January, 1874 the Pacific Tribune reported “In the upper town something of a change is in progress”. And then a few days later “the change we alluded to the other day in the railroad townsite has been fully consummated and the Olmsted plan thrown overboard in toto.” Somehow FLO was informed of his plan’s fate perhaps accompanied by the news that the Tilton Plan was reinstated. Square and rectangular lots in Tacoma went on sale in mid April and there was a bit of a rush before the Northern Pacific went into bankruptcy. News may also have reached FLO that the choicest lots were along Cliff, Tacoma and particularly Pacific Avenue. The boulevards he imagined lost their graceful sweep across the hillside but the grand width and long reach through the city remained.  At the north end of Pacific, FLO’s view of the sea survived and at the south end, where it crosses the original grade of the transcontinental rail line, there remained a suggestion of the diagonal lines that once inspired the curved latticework of Tacoma’s Olmsted Plan.

Twenty years after FLO imagined his great city on the Pacific he began work again on a waterside metropolis. This time it would be a great White City at the other end of the Northern transcontinental railroad on the shore of Lake Michigan. The Columbian Exposition of 1893 in Chicago would change the way the world saw great cities by introducing curvilinear boulevards, gracious parks and waterways, classical public architecture, suggestions of wilderness just in the distance and the magic of electric street lights and high speed transportation. Unlike his plan for the City of Tacoma, the Great White City was built and visited by hundreds of thousands during the summer and fall of 1893 but by the end of the year it was gone, erased by fire, a phantom.

The influence of the Columbian exposition did not disappear however. It took material form in cities around the world as classical public buildings, urban parks, civic landscapes and long boulevard perspectives became a measure of beautiful cities. In Tacoma, at the out looking north end of Pacific Avenue, the Italianate City Hall was completed in 1893, followed a few years later by the Renaissance white Spanish Steps and Elks Temple.  Together with the Northern Pacific Railroad headquarters building, the assemblage of neoclassical buildings and formal landscape elements that distinguish the end of Tacoma’s Pacific Avenue perspective today, clearly reflect Olmsted’s second phantom city. And under your feet rests the first.