Sometimes history seems completely character driven. The time, place and story all fade and the past is displayed in a face or a biography.
I’m working on a piece about the Tacoma Narrows Bridge and came across this photograph from the construction of the bridge that staggered me with its calm intensity.
Consider the mind of this unnamed diver and his crew as he readies for a blind drop the floor of the Narrows channel to rig the heavy stabilizing cables from the bridge towers to massive concrete anchors. A few minutes after this photograph he will be surrounded by an airless world of treacherous currents, relying on dead lead weights to direct him to a destination far from the safety of the surface. His contact will be through an intercom system that is being tested here before the steel helmet is locked over his head and onto the pressure suit. His return from the underworld will be by the hemp rope tied to his weight belt. The whole enterprise seems impossibly terrifying and yet there in the diver’s steady expression is something completely different that fear.
In 1939 they were building a bridge in Tacoma that was made of steel and cables and concrete and moments like this.                                                              October 28,2015

Ken Zajac contributed this:his name was Johnny Bacon. He had worked for 15 years prior doing this type of diving. During one of his dives here, he reported seeing an octopus over his communication to the tender (the man who watched his progress & safety from the barge) at 120 feet. He said that day the waters were clear- but that was during a slack tide. It was generally the case that the divers had a limited window of working time between tide changes, as during the tides it was nearly impossible. 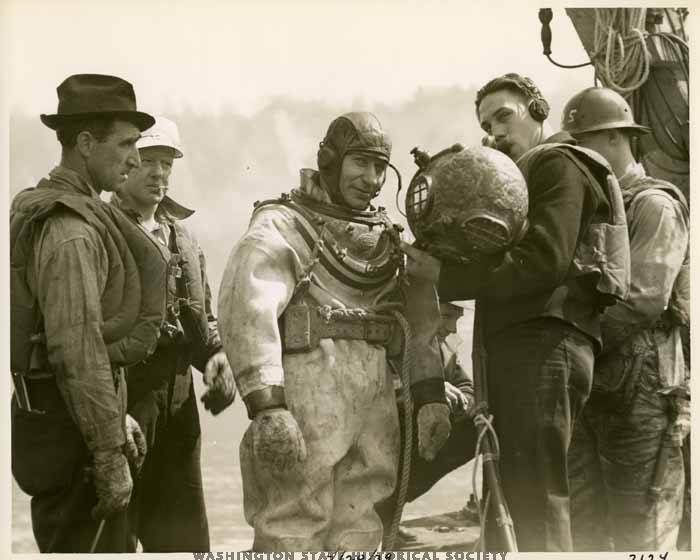 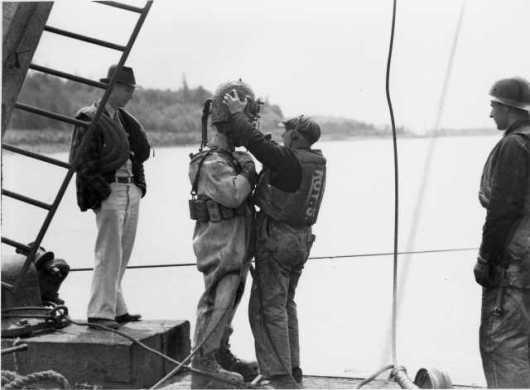 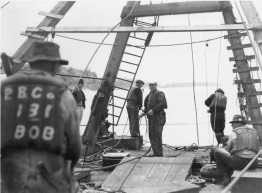 Ken Zajac: by the way, the terrible truth is that most of the divers of this era in bridge building suffered a horrific death- when the suits failed, or some accidental occurrence would happen during their dives. A literal description is that the pressure down there crushed their head when the waters penetrated the suits. Sorry for the morbidity, but it was their reality, and lends to Michael’s description of what they faced in their jobs.

KZM: Did Mr. Bacon live? Do you know?

Ken Zajac: I’d have to research that Karrie. As I recall, but I may be wrong- he perished in the way I described above ^^. It was on a susequent diving job. His suit failed and he was killed within seconds. But again- I am not positive this was him. I do know one of the divers on the Narrows project had this happen on that diver’s next job he worked on. 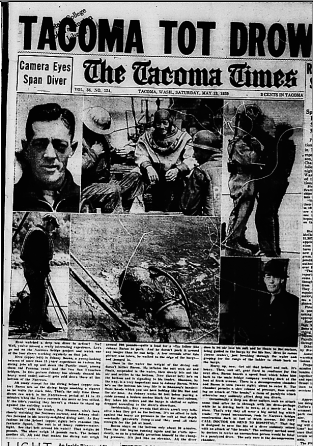