Villainy is much easier to recognize in fiction than it is in real life. In this last chapter of the story behind the Lorenz building at 17th and Market, the chase goes into Tacoma’s dark times and places and we meet a character of malicious evil.

By the mid 1960’s, downtown Tacoma was slipping. I-5, the new Tacoma Mall and rapid suburban sprawl were leaving the city’s urban center and historical heart in a state of neglect and advancing decay. The Lorenze Building was still operating as the Columbus Hotel with a familiar Japanese grocery run by Kenny Hirose on the streetfront and Willie Holland’s barber shop next door. On the three upper floors, the 44 time faded rooms, most with bathrooms and showers down the hall, were about half filled. The newspaper referred to the Columbus as a “negro hotel” which in December 1964 was being managed by LeRoy Frierson, a well known, long time hotelier in the neighborhood. Leroy had long standing ties to the Japanese American community and its likely that the upstairs tenants included Japanese Americans and other ethnic residents during a time when segregation was still hanging on to Tacoma’s political wayfinding.

Frierson must have found it a bit unusual when a silent, 60ish white man showed up at the desk in a long raincoat, military surplus canvas bags and no suitcase. He signed the register as Earl Farnham and was given the key to room 205 on the third floor rear, near the back exit. Across the street from the Columbus, the notorious nightlife figure Alma Jackson had operated her noisy bottle club, the Old Orleans, as a front for the upstairs house of prostitution. And uphill behind the Columbus, several residential houses had been raided and closed during the ongoing civic clean up of the late 1950’s. Leroy Frierson kept a legit, low cost hotel without a reputation for trouble with the police but he was also a realist and knew better than to pay attention to where his hotel guests spent the night or who they spent it with. Farnham moved into the room and drifted in and out, day and night as the first week of December passed.

Monday, December 7th brought a break in several days the rain. Exactly 23 years earlier Tacoma and the rest of the world were shocked by the news that Pearl Harbor had been attacked by Japanese planes and warships. As darkness set in that late afternoon, Leroy picked up the smell of smoke and rushed up the main stairs in time to see Farnham running from his room toward the rear exit with a rifle. 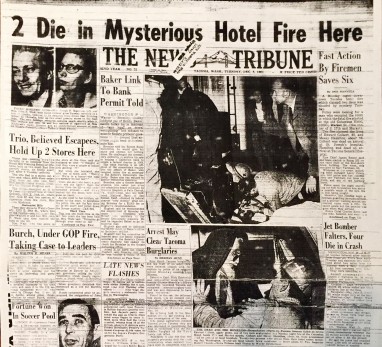 Behind him was the source of the smoke. Flames were already blazing through room 205 and the hallway was rapidly filling with smoke. There were occupants in about 18 of the rooms as fire spread from the third to the fourth floor of the 75 year old building. Most of them were single men, many of them older and dealing with disabilities. Before the fire department arrived, Booker T. Tripplett, a laborer who kept an $8 a week room on the third floor, began knocking on doors, telling the scared and confused tenants to keep their doors closed until he could get back and guide them out. Tripplett had also discovered that the armed Farnham was positioned  just beyond a wood footbridge running from the hotel’s rear entry to the back alley. He made the decision to get people out on the Market Street side rather that risk running out of the burning building into gunfire.

At 6:12 the fire was declared a 2-11 major alarm and soon there were 15 fire trucks and four cars on the scene, including a ladder truck that pulled four people from the top

floors. Jag Washington, a sightless 73 year old, heeded Tripplett’s warning to keep his door closed but as smoke filled the room and he became disoriented he began crawling out of his third floor window. A fire fighter, Jack Berg, spotted the blind man and quickly rode a telescoping ladder up to him, literally carrying the fellow down to street level and safety. In their third floor rooms, Maxey Hamilton, 68,  and Edward Colbert, 40 were not so fortunate. They were both found in their smoke filled rooms by medics but were dead on arrival at the hospital just blocks away. By then the third and flourth floors were burned out and water from fire hoses on three sides was pouring down through Kenny Hirose’s store ceiling.

Twenty two people got out of the building alive and once the fire was under control police began to search for the likely arsonist gunman that was supposedly stationed at the back of the building. Both Frierson and Tripplett had seen him but no sign of him was found immediately after the fire. Nor was mention made in the newspaper coverage that followed about the Pearl Harbor anniversary and a possible connection to Farnham’s actions.

By 1964, most of Tacoma’s once lively Japantown was gone. At the end of World War Two, Tacoma’s once large Japanese community had little to return to in the downtown. The businesses and homes they were renting before the war (because property ownership was blocked by federal immigration and naturalization laws) had been rented to others or sold. In the Auburn Valley, the vigilante-like Remember Pearl Harbor League actively opposed the return of interned Japanese families and Washington State Governor Monrad Wallgren was an outspoken opponent of their return from the camps. Twenty years later, the long vacant Japanese Language School, Buddhist Temple, Whitney Methodist church and a hand full of small merchants like Kenny Hirose made up the few remaining fragments of Nihonmachi. The Columbus Hotel never lost its ties to the Japanese community and Kenny’s grocery store was a vestige of  the days when it was the finest Japanese operated hotel in the city.

Did Earl Farnham choose the Columbus for

his crime because of its history? Was the December 7th date he chose tied to a grudge he was holding from the war (He was of WW2 veteran age)? This much we do know. Late on the night of the arson, a fireman guarding the ruins noticed a shadowy figure in a raincoat prowling the back of the building. He called the police but by the time they arrived the figure had disappeared. They found a loaded rifle laying near where he was last seen. The upper floors of the Columbus Hotel were demolished and on the remaining ground floor, Kenny Hirose reopened his grocery store. And Tacoma plunged into the turbulent civil rights era of the late 1960’s leading eventually to the recall of the Mayor and a majority of the City Council. 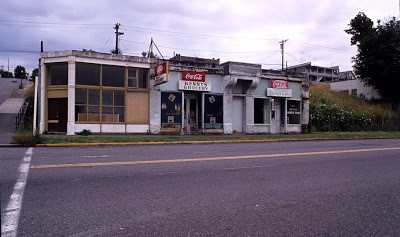 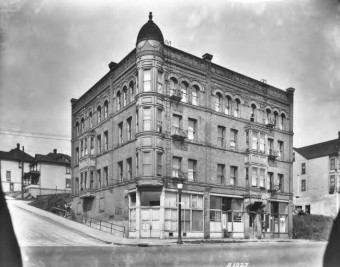