Here is Albert Bierstadt’s map of Tacoma from his visit in 1890.

The results of the trip, along with previous visits, were several landscapes and other exaggerations about the adventure and surroundings. I can’t figure out if the hallucinations were going on in his mind or just on his canvases. No wonder the railroads were paying any price to publish his paintings. Who wouldn’t buy a ticket to see Bierstadt’s fantastic world, full of operatic storm clouds, preposterous lighting effects and haunting mountains and rock formations. All he was missing was the Valkyries.

The map is from the new Metropolitan Museum digital image library opened for free public use.

Abby Williams Hill covered some of the same ground

while working for the railroads, painting landscapes for publication in lure brochures and Victorian era tourism posters. Hill lived and worked in Tacoma and left a magical legacy of her work to the University of Puget Sound. By 1909, her studio and residence were perched above Wright Park atop the very urban Hillcrest Apartment Building at 5th and South G Street.  While she worked in the generation after Bierstadt, Hill rendered the

natural world with a similar sense of wonder tempered by the fact that she lived long enough to begin worrying that the tourists her paintings attracted might ruin the landscape she captured in her work. Bierstadt died in 1902 barely past the 19th Century and Hill in 1943 while the Second World War was at its ugliest. 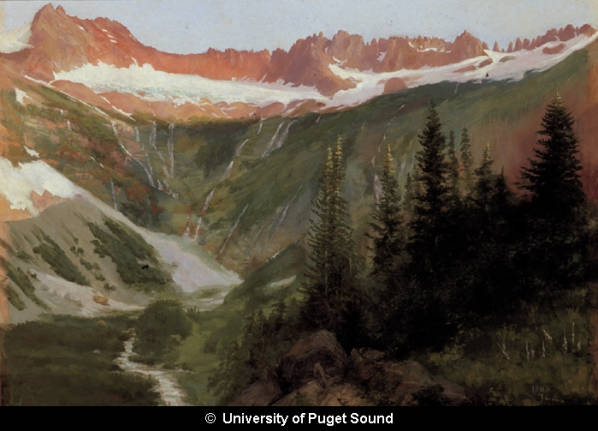