What follows is an account of the Centennial Flouring Mill fire on the Tacoma waterfront just north and below Stadium Bowl. At the time, it was the most costly and difficult fire in Tacoma’s history but the story is about more than just an industrial disaster. Its about the close ties between where we live and where we work in this seaport city.

The front page weather boxes on the Tacoma Times and News Tribune both called for snow on the morning of Thursday, January 30, 1947. The day crew at the sprawling three-building Centennial flour milling and wharf complex began arriving with sunrise at 7:40 a.m.  As the workday started, switches began to be thrown, lights came on and the grinding machinery of the mill began growling to life. Somewhere up in the main, five story, heavy timber mill building a spark shot off a blown transformer into a cloud of floating flour dust. Rare as lightning in a snowstorm, the explosion that followed was one of those things everyone who worked on the waterfront feared. The first alarm reached the main downtown fire station at 7:58.

The first engine companies to arrive found many of the 200 employees already fighting the growing fire. They also learned that at least 2 men were missing inside and that gas lines running between the three building were burning and spreading the blaze. The prevailing southwest wind was blowing the flames north from the mill to the two smaller buildings and wharf. Fire Chief C.J. Eisenbacher called a second alarm almost immediately followed by an extraordinary call at 8:32 for all off shift firemen. By 9:00 twelve companies were on the fire along with virtually the entire Tacoma Firefighting force. Two massive explosions greeted them just after 9. All three building were now involved.

From the very beginning Chief Eisenbacher knew a terrible coincidence was at play. The most valuable piece of fire fighting equipment he had for an industrial waterfront fire 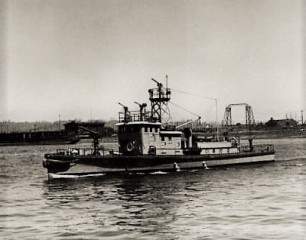 was in pieces. The City’s 1929 fireboat, with its powerful 4 inch Big Bethra Nozzle that could deliver 6500 gallons of water a minute, was getting its first overhaul in 18 years. Just two days before, the main engine and propellers had been disassembled.

Another obstacle was that the main rail lines and roads that ran along the narrow strip of waterfront were cut off by the fire so firefighting had to be done by separate engine companies and pumpers on the north and south. The giant 16 inch water main that ran under the Northern Pacific tracks from Old Town was out of service to fix leaks so water lines had to be pulled to the fire front on each side. Hose companies were also deployed above the fire in the Stadium neighborhood. It was quickly discovered that the 6 inch residential waterline above could not supply pressure to the nine hoses tied into hydrants. More than 150 firefighters were poised on three sides of the monstrous fire and none had enough water.

engineers opened valves on the leaky waterfront line and the hoses on the ground to the north and south surged. Then the water pressure was raised to extreme levels in the Stadium district and water from the hillside hoses began reaching the fire directly. And then a Foss tug pulled up on the water side towing the beleaguered City fireboat with fire crews and mechanics on board still working on the pumps and nozzles. Both vessels were positioned dangerously close to the wharf and directed their full water jets on the burning buildings. A fire scow joined them in fighting the blaze from the east. With hoses finally positioned on all sides, the firefight was in full fury for the next two hours. The towering 1909 mill building burned to its heavy timber frame but did not collapse as the intense heat spread to the flour and grain inside, changing the smoke from black to light brown and the smell from acrid to burnt toast.

By noon there was no chance of saving any of the Centennial complex and the strategy shifted to saving the Sperry Flour Mill silos immediately downwind to the north. Finally the main building failed completely and the fuel for the fire was reduced dramatically. The largest building in the Centennial complex was a seven story concrete structure that was still under construction against the hillside. Together with the concrete silos of the Sperry Mill it created a fireproof wall that stopped the windblown fire. By late afternoon, Chief Eisenbacker could report to the mayor and newspaper reporters that the fire was under control.

During the very dangerous Centennial fire both Tacoma firefighters and mill employees worked their way into the burning buildings to evacuate workers and finally check to be sure they were empty. By 2 o’clock everyone was accounted for, workers and firefighters. Not a single life was lost in Tacoma’s most devastating industrial fire.

change for Commencement Bay. The first freight trains arriving in Tacoma on the transcontinental railroad  in the 1870’s brought wheat and grain destine for Asia by sailing ships. The Northern Pacific Railroad, headquartered at a Pacific Avenue perch above the harbor, built a wall of warehouses along Tacoma’s chinstrap waterfront and for a generation their main purpose was the handling and storage of wheat from the Dakotas and Palouse headed for the noodle makers of Shanghai and Yokohama. See Wheat Fleet

As steam freighters began to replace windjammers in the wheat trade and bulk loading by chutes replaced 100 lb. bagged grain loaded by stevedores, grain elevators replaced the wharf-side warehouses. The first monumental elevator was built above the NP coal bunkers in 1893 and in 1909 the Tacoma Grain Company constructed their elevator and mill building just as the milling of flour surpassed the trans shipping of grain in economic importance. Tacoma Grain Company competed with several other milling companies that soon lined the shoreline between downtown and Old Town including Sperry Mills, Puget Sound Flouring Mills, Watson & Olds, and the Cascade Cereal Mills. Albers Milling Company chose to build inside City Waterway just below Union Station and their building still stands, the last vestige of Tacoma’s industrial scale flour makers. Pyramid was the brand name for Tacoma Grain Company flour and for decades mariners and ship passengers arriving in Tacoma passed the 30 foot tall block letters on the mill.

In 1931 the Tacoma Grain Company was purchased by the much larger Centennial Mills and in the period just after the war its was investing and expanding in Tacoma. The fire changed all that. The damaged concrete structure at the center of the expanded Tacoma Centennial mill was demolished, the site was leveled and the insurance settlement disappeared into the company’s accounts. In 1948 Centennial bought the large Crown Mills in Portland from Tacoma’s familiar waterfront warehouse owner Balfour, Guthrie & Company and consolidated its headquarters there. The agricultural megacorp Archer Daniels Midland Co. bought the old Centennial Mills in 1981.

Grain and flour are still a part of Tacoma’s busy waterfront. The gigantic concrete flour silos and covered loading facility on Schuster Way today are built on the site of the Centennial Mill complex that was destroyed in the 1947 fire. Railroad tracks still run along the shoreline bringing wheat and grain from the mid-west just like they did in the 1880’s when Washington was still a territory. Before sunrise on that January day in 1947, the freighter Penn Victory left the Tacoma mill with one last cargo of flour headed to the orient. The same voyage begins several times a month from the same compass point on the Tacoma waterfront 70 years after the day of flour and fire.

Thanks to Mick Flaaen for this short form documentary using 8mm footage of the Centennial Mill fire taken from the hillside neighborhood above the conflagration. Its part of the Tacoma Home Movies series from Mariposa Productions.