Old City Hall is causing concern in many corners these days but Tacoma’s most magnificent public building has survived uncertain times before. It seems appropriate right now to revisit Norman Maddex, a City Light wireman in his boatswain’s chair in November 1935 hanging from the clock tower at City Hall. Times were tough in the middle of the Depression and the cost of keeping the 1893 building repaired and operating were almost too much for City officials.

That summer a labor strike had overflowed into the downtown and a Bloody Battle was fought between waterfront workers and National Guardsmen at 11th and A Street. City police stayed out of it partly because of political support for the strikers and partly

because of a depleted number of officers due to financial troubles at City Hall. To save money nothing was spent on the old clock tower for years and as winter set in that year the hands on Tacoma’s most important clock were bent and broken, the time mechanism was erratic and the tower lights were mostly blown out. As a metaphor for a city on hard times and dim hopes, City Hall stood for Tacoma’s condition in the depths of the Great Depression.

The whole situation finally became too much and before Christmas in 1935 City crews took it upon themselves to relamp the tower lights, fix the hands on the dial, and reset the Howard table clock to the correct time.
So, while sceptics chose to see Old City Hall as a symbol of neglect or fading support for reusing Tacoma’s rich architectural legacy let’s remember Norman Maddex in his perch more than 80 years ago, making things happen with his own hands.

Image by Andy Cox from the Recaptured City project

1893. Before Howard clock was donated and installed in the tower 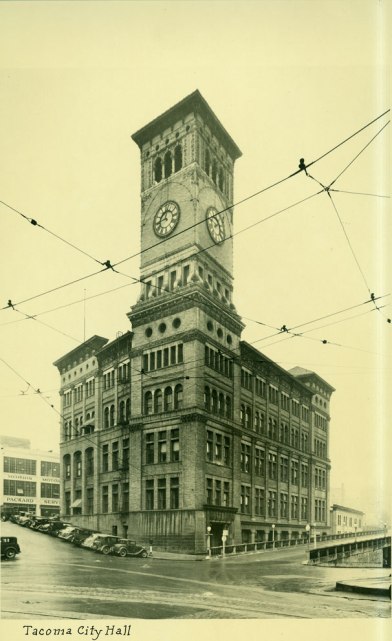