sailed into Tacoma and tied up along the NP wheat warehouses below the city. These were the waning days of the age of sail as steamships and trans Pacific passenger liners were becoming the elite vessels in the great harbors around the world. But because hard wheat and cut lumber were important, durable bulk exports from Tacoma, that shipped well on long voyages in the enginless holds of the big windjammers, Commencement Bay remained a familiar port of call for true sailors well into the 20th Century. Tacoma was a sort of sanctuary for the last generations of mariners who depended on the wind-who navigated by cloud movement, barometers, sail charts and trusted currents.

This striking portrait of the Captain and officers on the upper deck of the British registered ship Olivebank, is a study in purpose and pride. The image is a strongbox of  technical details, portraiture and narrative. These are young men steering a new born vessel, 325 feet long and just launched from the famous Glasgow shipyards on September 21, 1892. In their posture and gaze each of them, in their own way suggest a determined competence, particularly Captain Petrie in his embroidered cap, flower boutonniere and heavy gold watch chain.  The other’s wear the formal vested suits and silk ties of merchant seamen, literate adventurers who had brought their ship around the world to the booming country around the inland waters of Puget Sound.

was nearing completion across busy Pacific Avenue from the Northern Pacific Railroad Building. The towering Romanesque County Courthouse loomed in a fresh silhouette above the city.  There was a massive brick hotel building under construction to the north and busy sawmills and boatyards lining the waterfront. Downtown Tacoma was busy with fashionable new brick buildings, packed streetcars and the novelty of electric street lights and signs.

The point-in-time captured in the portrait of these seafarers was soon to pass. A world wide economic depression was about to stall

Tacoma’s growth and the great shipyards of maritime nations were about to slow the building of commercial sailing vessels. The discovery of gold in the Klondike in 1896 and the start of the Spanish American war in 1898 propelled Seattle ahead of Tacoma as a commercial and population center in the Pacific Northwest. As the operation of commercial sailing vessels faded Tacoma, like other seaports, began to reshape its wharfs and loading docks to accommodate steamships and commercial motor vessels. The big sailing ships became part of the background.

The Olivebank lasted longer than most of the great sailing vessels that visited Commencement Bay. It changed to Norwegian registry and was well maintained for long voyage coal shipping. In 1939, the deep hulled ship hit a wartime mine off Denmark. Only 7 of its 21 man crew were saved. 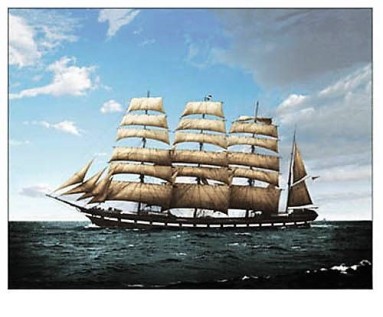 This photograph is from a wonderful album and collection of images from the Burroughs, Holt, Dickson families going back to the 1880’s. Watch for stories from the photos and research to follow. Thanks to Bruce Smith for the discovery.