The dark corners of history can hide in the most innocent of places. These proud parents have entered their children in the “Better Babies” competition at the Western Washington Fair in Puyallup on October 2, 1923. They were among over 700 contestants aged between 6 and 48 months of age. 61 babies were awarded medals and certificates recognizing their exemplar physical and mental development. 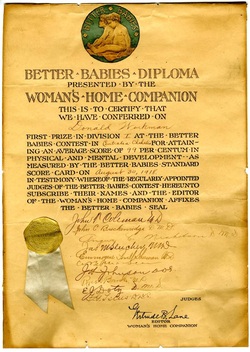 It took 40 judges, mostly doctors, nurses and child specialists to “score” the children using a system of deductions from an ideal score of 100. The babes were docked points based on variation from an ideal set of physical, health and intellectual “scientific standards” (not unlike the way livestock is judged for ribbons). Scientific baby competitions had become a familiar part of state fairs by the late teens and twenties as an offshoot of the Eugenics movement in America. Today the pseudoscience evokes a dark and misguided side of the progressive period at the beginning of the 20th Century.

By 1923, there was an entire building dedicated to the Better Babies judging and during the fair season it also featured exhibits and

informational displays on Eugenics and related social science ideas. At the time, Tacoma and Puyallup were within the Congressional district of Representative Albert Johnson, a former editor for Sam Perkin’s Tacoma News and later the publisher of the Grays Harbor Washingtonian. In 1913 Johnson was elected to Congress from the district that included both Aberdeen and Tacoma. By 1920 he had ascended to chairman of the House Committee of Immigration and Naturalization and had become a champion of the pseudoscience of eugenics and its relevance to ethnicity and immigration. And here is where it gets really creepy.

Congressman Johnson had made the acquaintance of Harry H. Laughlin, one of America’s leading advocates for using eugenic to shape immigration policy. In fact, Harry 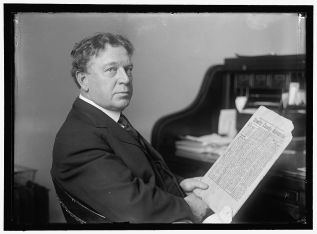 Laughlin’s reputation as a eugenics proselytizer went beyond immigration policy to compulsory sterilization laws that were eventually passed in many states, including Washington, and upheld by the United States Supreme Court in 1927. As Chairman, Johnson arranged to have Laughlin serve as expert eugenics agent for the House Committee on Immigration and Naturalization and together they shaped Federal legislation that limited immigration based upon national origin quotas and ethnic preferences. Harry Laughlin’s ideals and policies in the field of eugenics were later adopted by Nazi Germany and in 1936 he was presented with an honorary

degree by the University of Heidelberg for his work behalf of the “science of  racial cleansing. By then the public and political fascination with eugenics as a solid social science was ending in America and Better Baby contests along with the ribbons and medals were put away.

Almost forgotten today is the fact that the Reed Johnson Act of 1924 (written and named for congressman Albert Johnson) which is still the basis for federal immigration policy had its origins in Tacoma’s own congressional district.