What’s to be learned from a badly damaged photograph of three children on a sidewalk?

Let’s start with the knowledge that this positive image is from a 5″ x 7″ glass plate negative that is now at the Washington State Historical Society in Tacoma. Its part of a larger group of photos taken between 1915 and 1925 (approximately), many of which are water damaged like this one. Since most of them are of people and storefronts in the Tacoma area that’s where to start. 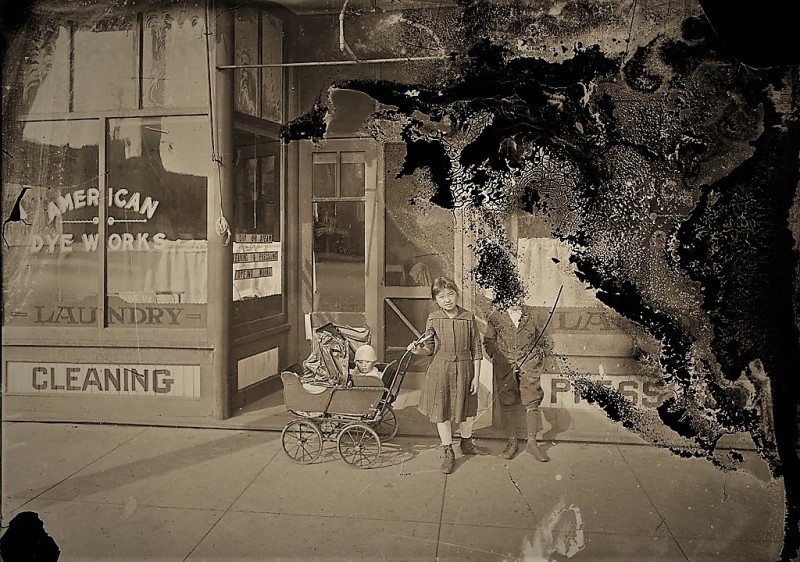 The American Dye Works shows up in Tacoma City directories beginning in 1913 at 5216 South Tacoma Way on a stretch that is sometimes mapped as South Union. It stayed there in business and in the directory until 1926 operated the entire time by Hashime Imamura. Mr. Imamura shows up in the 1912 directory working at the Pacific Hand Laundry in Tacoma’s downtown Japantown. It’s not a big reach to think he arrived in Tacoma  with the wave of  Japanese immigrants that came to America just before and after the opening of the Panama Canal in 1913. By then several passenger steamships  came and went each week between Tacoma and the Japanese port of Yokohama.

In the 1913 Polk directory, Hashime has become the operator of his own laundry at 5216 South Tacoma Way called American Dye Works. His new shop was in the busy commercial district near the massive NP railroad shops which for generations was the largest employer in south Tacoma. Before I-5 and the Tacoma Mall divided and dismantled the neighborhood after the second world war, the streetcars and short walking distance made south Tacoma Way the daily shopping district for most of south Tacoma.

was also the family home for the Imamura family who lived upstairs in the two story building. In this picture from about 1920, its easy to imagine Hashime and his wife Hede standing next to the photographer behind the camera, holding back a sense of pride and accomplishment in their business and young family. There are crisp white curtains in the window, freshly pressed fashionable clothes and stockings on the kids and the perfect symbol of a prosperous urban family, a baby carriage with occupant.

The screen door behind the children was typical for laundries where fresh air was needed continuously. Laundry work was mostly done by hand but the steam presses, mangles for sheets and flatwork, and ironing equipment all used steam from a boiler at the back of the shop making the business sweltering in summer and toasty the rest of the year. A walk down the sidewalk on South Tacoma way in these days would have been an adventure in changing fragrances, fresh bread by the bakery and the fresh smell of clothes soap, starch and steam from laundry.

Steam would have been something shared with many of Hashime’s customers. The sprawling Northern Pacific Railroad shops, that were visible from the back door of the American Dye Works, employed hundreds of skilled Tacomans, building and rebuilding the largest most powerful steam locomotives in the world. The climb from Puget Sound through the rugged Cascades was a steep, severe grade and under steam it took massive engines to pull passenger and freight rolling stock. The strain was brutal on the locomotive boilers and the South Tacoma shops and boilermakers were legendary for their work in creating and maintaining the steam age marvels. Like the Imamura laundry, plumbs of steam were rising from the shops day and night as shifts changes and workers came and went like rail traffic on the Prairie Line that ran through the brick industrial complex and business district.

The N.P. workforce at the South Tacoma shops

would have been a solid customer base for Imamura and the fact that the business operated for decades indicates a loyal clientele. Managers, office staff and even crew bosses were expected to wear ties and collared shirts even under their coveralls. Cardboard collars were replaced with starched cotton shirts and pressed ties after the Victorian era and Hashime probably washed, starched and pressed a bundle of shirts a week for less than a dollar. He probably knew many of the white collar bosses at the NP shops by name and they him.

In 1924 Federal laws on immigration and more tightly enforced state laws on property ownership made it illegal for businessmen like Imamura to own his own enterprise or place it in the name of his oldest daughter, who was probably born a U.S. citizen. The American Dye Works became the American Hand Laundry in 1925 and continued to operate but the Great Depression, the idling of the NP shops and the physical changes to the streetscape along South Tacoma Way as automobile traffic and Highway 99/Pacific Highway replaced foot traffic and sidewalks undercut the little laundry. The story of the Imamura’s fades for me in the 1930’s. If the laundry was still running in 1942, the family members, like all Tacoman’s of Japanese descent, would have been interned in May, taken to Tule Lake California and then Minidoka Idaho during World War Two. There I lost the stream of the story.

This photograph is perhaps my favorite in the series of glass plate negatives I have been exploring through this Clear as Glass series. I love it for the story it tells about a Tacoma family and an American business during the first half of the 20th Century. My own family, back to my immigrant grandfather, operated laundries and I grew up wandering through the hot, steamy racks of cleaned cloths and freshly pressed shirts. Maybe I appreciate the photo most for the suggestion of steam in the water damage on the negative and the addition it makes to the picture’s story.

Thanks to the Washington State Historical Society for images.