When the westernmost tracks of the Northern Pacific transcontinental railroad reached saltwater in mid December 1873, the terminus ceremony didn’t exactly involve a golden spike. In fact it was a slightly anticlimactic event with a few dozen rain soaked participants standing on a hillside clearcut surrounded by massive tree stumps, a village of canvas tents and plank sheds, a construction locomotive without decorations, a very fresh set of tracks and a terminal city called Tacoma that was still largely in the imagination. The ceremonial last spike was iron and as noted by historian Murray Morgan there was a 1500 mile gap of unbuilt NP railroad between eastern Washington and the Dakotas.

Over the next 15 years the gap was closed and most of the obstacles of nature and distance were overcome or engineered around except for one unimaginably difficult barrier. The fastest and most direct route from the Great Lakes to Puget Sound was not along the Columbia River to Portland and then North along the western slope of the Cascades. It was straight through the Cascades.

In early 1881, the legendary deep woods engineer Virgil Bogue led a survey party into the central Cascades looking for the most practical route over or under the coastal range. It took another five years to decide that neither was entirely practical so the railroad chose to do both. In January 1886 a contract was granted to Nelson Bennett and with the help of his brother Sidney work began in February on what would be a two and a half year operation to tunnel 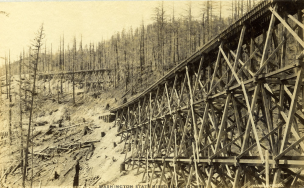 under the 3500 foot mountain pass Bogue had named Stampede (great name with a good story for later). In the meantime, clearing and grading crews worked through winter months and heavy snow to carve a precarious system of switchbacks and trestles over the pass at grades more than 5%. Two copies of the most powerful steam engines in the world were used to lift trains up the three switchbacks on one side, along a sweeping double horseshoe at the summit and then down three more steep switchbacks on the other side. It took an hour and a quarter for the five car trains, with a monstrous locomotive at each end and brakemen stationed on the roofs, to cross the 8 mile surface route over Stampede Pass. But the really scary part was below.

Sidney Bennett’s east portal miners began digging into solid rock on Lincoln’s birthday 1886 using hand drills, hammers and dynamite. The bore into the rock face from Tunnel City was 22 feet high and 16 1/2 feet wide and before they began using mechanical drills the mining moved at about 3 1/2 feet a day-42 inches or just under 2 inches an hour with 200 miners working three 8 hour shifts. The pace raced to 5.8 feet per day once the Ingersoll air drills were operational and they were deep enough into the shaft to shoot half wall dynamite charges. By April, the west portal was started, employing 156 men and six families living at Camp Creek. Eventually, the west camp became a small village with a sawmill, store, saloon, post office and restaurant along with bunkhouses and a China house for the nearly 2000 Chinese contract workers who cleared timber, built and maintained the tracks and trestles and handled

the incoming supplies and explosives. A small elite group of Chinese “Firecracker men” worked on the regular blasting shots at the two tunnel headings. The Stampede tunnel was almost two miles long with a 2.2% crown so it would drain water down each end but as the bores got deeper it became obvious that ventilation would become a problem. All the future long tunnels in the Cascades were “boresighted” meaning perfectly flat along the floor.

As the months passed, the monotony and cost of tunneling under the Cascades began to raise its price. The constant night time of the tunnel, with its iron filament electric lights and the hiss and hammer of air drills, started taking lives. The west side was the deadliest.

The records show 17 men killed, 17 more maimed or seriously injured by rockfalls, mechanical error or explosion. On the east side 11 more died with 22 men injured by the same occupational snakebites. With more than a 100 people in the two headings of the tunnel at all times someone died violently every month, usually surrounded by witnesses. As was the custom with all American railroads during the transcontinental era, no count was kept of Chinese worker deaths. As required by contract, their bodies were shipped home to China unrecorded.

In late March 1888, an upstairs crew on one of the headings heard the dull thud of a dynamite shot on the other side. It set off the race for the $1000 Bennett had promised to the first man through the tunnel and steak and whiskey for his side. It took six weeks to arrive at the shot that blew through and in the dust cloud a man from each side scrambled for the jagged opening. Cut and bruised the west side’s champion fought his way through to become the first person to pass under the Cascades. Mrs Bennett was not to be outdone and followed to become the first woman to make the underground journey and

on May 14, 1888 the locomotive Nelson Bennett named after his daughter Ceta travelled the tunnel’s full length on tracks. Based on calculations Nelson Bennett made before receiving the contract for digging the tunnel, the first operational passage by a steam engine under the pass was 16 days ahead of schedule.

It can be argued that no feat of engineering before or since the Stampede Pass Tunnel has so changed the destiny of Tacoma. Once the main line of the Northern Pacific dropped directly down to Auburn and then Tacoma, the Puget Sound region began to overtake Portland in commercial importance and population. Other lines followed the NP from Chicago and the east. The Great Northern Railroad came right into Seattle over Stevens Pass and built longer and more modern tunnels (including the King Street Station tunnel under downtown) and the revolutionary transcontinental Milwaukee Road, run entirely on electricity, came over Snoqualmie Pass with its own lengthy tunnel that today is part of the Iron Horse Trail. The first railroad was passed by late comers who could benefit from explorers on white mules and hard rock miners who dug by hand in soft hats. But in those days Tacoma’s fate was tied to the Northern Pacific railroad and its builders-first to travel over and under the Cascades. 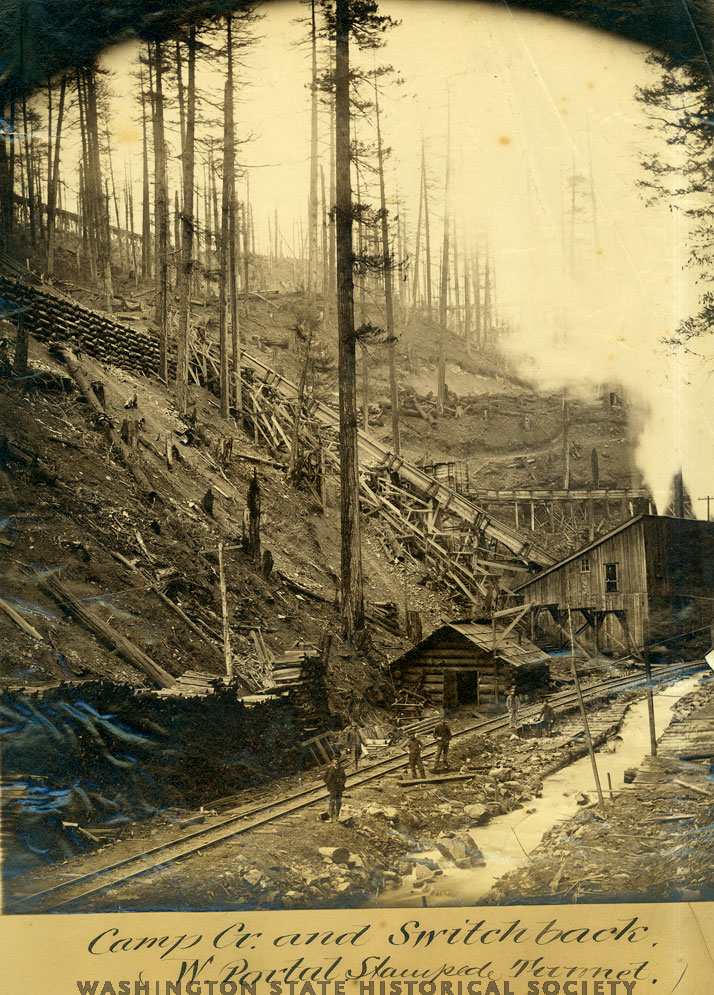