When the visionary photographer Carleton Watkins visited Tacoma in 1882 the city was finally  recovering from the national economic panic of 1873 and was riding the crest of its most thrilling early days. It was a manic time for the city and the  Northern Pacific Railroad that had swung wildly from the monumental success of building  a transcontinental rail line across the American west to flirting with bankruptcy and  abject failure. Both good days and bad days were still ahead.

Tacoma’s ups and downs were not unlike the fated adventures and underappreciated work of Carleton Watkins himself. The lure of discovery had brought him across the country from New York State to California

during the 1849 gold rush. Coincidence introduced him to the alchemy of photography.

By 1858 he was experimenting with the visual magic of stereography and the trick of using dual lens photography and binocular vision to create the startling perception of three dimensional images. Before the American Civil War Watkins was becoming famous for his 3D photographs produced in his San Francisco studio. In the summer of 1861 he headed to the Yosemite Valley with his stereo camera and a new invention that took a dozen mules to carry. It was a wet plate camera that made negative images on mammoth glass sheets 18 x 22 inches in size. They were the high definition images of their day and when Watkins was done with the expedition he had produced 100 3D negatives and 30 of the new mammoth plate images. They startled the world.

and were exhibited at the Centennial Exposition in Philadelphia. Oliver Wendell Holmes declared his images “a perfection of art which compares with the finest European work.” and in 1864 President Lincoln signed into law an act of congress to preserve the Yosemite Valley, a first step toward the establishment of a National Park system.

1864 was also the year Abraham Lincoln signed the charter for the Northern Pacific Transcontinental Railroad which narrowly completed building tracks to its Pacific terminal on Commencement Bay in December 1873 before plunging into bankruptcy. The economic crash that stalled Lincoln’s dream of a railroad from the great lakes to the Pacific Ocean also shattered Carleton Watkins’ world. In 1875 debtors stepped in an seized his San Francisco studio along with his thousands of printed stereo images and negatives. The creditor and another photographer named Isaiah West Taber began selling his stereographs and photos under Taber’s name and eventually allowed the mass reproduction of his work in boxed sets. 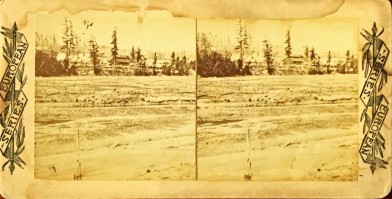 Watkins stereo view of the N.P. shops(Union Station site) from the mudflats 1882. Original and Taber copy

Watkins started over. He rebuilt his mammoth plate camera, better this time, and found a new twin lens stereo camera. He started at Yosemite finding locations and camera setting the “would give the best view”. In the months and years that followed he traveled north to the Columbia River gorge, Puget Sound  and British Columbia. He transported his bulky kit east to Yellowstone, Utah and Arizona then down into Mexico creating sublime visual documents of the western landscape.

His visit to Tacoma in 1882 coincided with what visiting Rudyard Kipling called a “boom of the boomiest”. The Northern Pacific railroad was finishing the last miles of track across the continent and were making a push over and under the Cascades directly into the city. Carleton Watkins set up his big camera, prepared a mammoth wet plate and recorded the terminal end of the N.P.R.R. in a moment of overwhelming beauty and scale. It may be the best photograph ever made of Tacoma and Commencement Bay during the railroad era.

Watkins made other large negatives and stereographs of Tacoma and Seattle during his 1882 trip and later visits. He rebuilt his San Francisco studio and his reputation but by the mid 1890’s was struck again by fate of the bitterest kind. He was losing his eyesight. By 1897 he was almost completely blind, cared for by his wife and two daughters but isolated from the imagery that had become his life work. Even the mammoth plate prints faded from his view. The 1906 San Francisco earthquake and fire consumed his studio shattering hundreds of magnificent mammoth plate negatives and burning almost all of his stereograph negatives and cards. It broke him and in 1910 he was committed to the Napa Valley Hospital for the Insane where he died in 1916 at 87 years of age.

The work of Carleton Watkins was overshadowed by later photographers of the far west, like Eadweard Muybridge, who enjoyed the patronage of railroad baron Leland Stanford. The cheap copies that were made of his stereographs became common misrepresentations of his talent and the surviving mammoth plate photographs were rarely exhibited outside California during the 20th Century. 100 years later however, his work has reappeared to dazzle viewers in a time of HiDef imagery, 3D cinema and visual magic. What technology cannot create is the world of a century ago that traveled through his lens and illuminated his mammoth plate view. 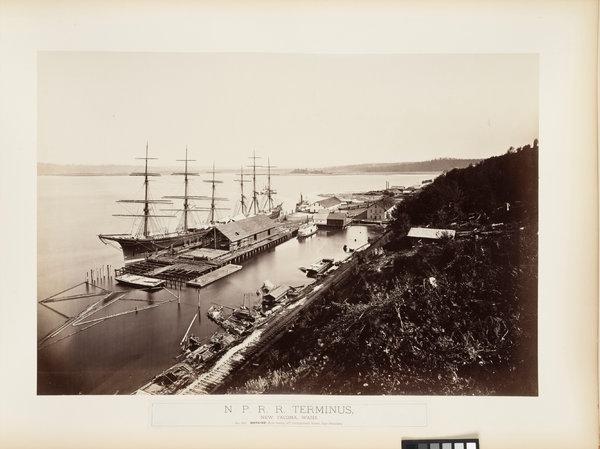 This image appeared recently in the New York Times Art section accompanying an article about the Hispanic Society of America selling their collection of 130 Watkins mammoth plate photographs to the Metropolitan Museum of Art in New York.