The Colonial Theater is a parking lot today tucked in between the Pythian Temple and the Subway Building at 9th and Broadway. There were always bigger, fancier, more prestigious houses in Tacoma’s theatre district but the Colonial was always scrappier, riskier and a bit more zany than the rest. During the roaring 1920’s, you could count on some stunt or costumed event with every second tier film or B movie playing the 800 seat landmark.

Never mind its stately 1914 facade by the classically trained architect Roland Borheck, the Colonial in its glory was capable of sponsoring a marathon through the city one week and a dog sled race the next, complete with arctic wolf dogs, polar bear fur parkas and seal skin mukluks.

The Colonial was into novelties and spectacles during the 20’s and survived the arrival of talkies at the end of the decade. When the massive 2000 seat Tacoma Theater reopened next door in 1927 as the Broadway with “full sound”, the Colonial sponsored a model airplane contest in conjunction with a showing of the “Big Parade”, a John Gilbert  action film about World War One aviators. Charles Lindbergh had just buzzed Tacoma during his national tour following the trans-Atlantic flight in May. The grown ups were dazzled by new Broadway Theater, but the kids flocked to the Colonial for cool prizes like trophies, caps, rain capes and baseball gloves.

On October 1 1927 Darwin Shope won the airplane contest and was presented with a luminous wrist watch. The Colonial knew how to win hearts.

The 20’s turned out to be the best of times for the Colonial but with so few seats it needed to up its game by 1932. The contests, door prizes, free ice cream and natty usher uniforms were not enough. That year new owners went for a full face lift, converting the Neo Classical edifice into a trendy Art Deco storefront called the Keyes Building. The stone pilasters and pediments were stripped off and a smooth Vitrolite surface with nickle silver trim was applied over the red brick. For the Tacoma kids who had grown up spending Saturdays at the Colonial, the news that it was becoming home to the Vogue Beauty Shop was unimaginable. And what did dress shop named Mode ‘O’ Day mean anyway compared to cliffhangers, superheros and rocket ships.

But the inner showplace was not to be lost to cosmetics and fashion. Just two years later in

1934, a smaller but still mighty 420 seat movie theater reappeared under a fresh blazing neon marquee. New owner Mike Barovic named it after his daughter BEVERLEY and through the Second World War it was a popular “small house” with the auditorium set deep behind a row of retail stores along Broadway. In 1945, the name changed again when the theater was converted to the TELENEWS showing 24 hour newsreels, short features and documentaries.

But in the post war years, all the downtown theaters were suffering as automobiles, drive-in theaters and television became the circling tigers coming at night taking their bites out of the heart of the district. By the mid fifties, the whole building was retail except for the second floor, where KMO radio operated studios and occasional movie stars like cowboy singer Gene Autry performed. In 1968 the counterculture discovered the old theater and it became the Court C Artist’s Mall, coffee shop, music venue and surreptitious cannabis retail outlet. By the time urban design visionaries began planning for the restoration of the Panatges and the creation of the pedestrian only Broadway Plaza project, the ghost of the Colonial Theater was almost too faint to remember. The last walls of the theater were demolished in 1988 revealing on one side a wall sign advertising Klondike gold rush era outfits and on the other the smoke stained stone wall of the legendary 1889 Tacoma Theater that was burned out in 1963. 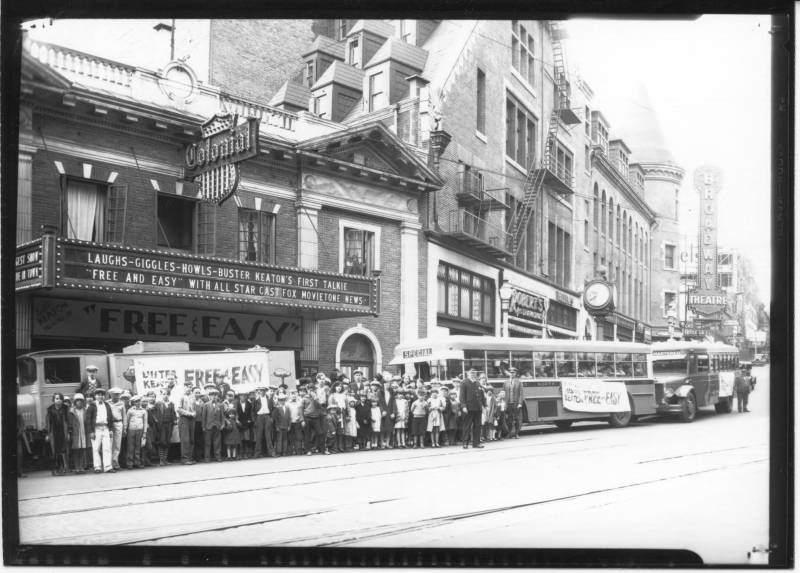