On the ever changing list of obscure historical Tacomacenteric objects, artifacts and playthings this curious wooden horse cannot be overlooked. 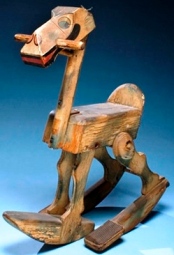 While the picture may not be one of the actual Hollywood Hobby Horses involved in the story to follow it is an authentic, patented example of the zany, ingenious and truly odd products designed by silent film star Harold Lloyd. And Harold Lloyd was more than just a movie star and celebrity in Tacoma. His wife Mildred Davis graduated from Stadium and the couple were often visitors to her parent’s home in the North End. But let’s not get ahead of the story. Mrs.Lloyd 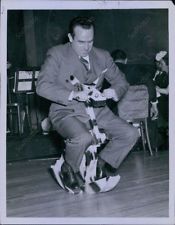 On April 20, 1940 Harold Elrod proudly opened his new and very novel dance hall on Highway 99. Mr. Elrod had an appetite for the unusual and it was on full display earlier that year when he bought a roadside cafe on the busy Federal highway, 15 years before the construction of I-5 . Between the Northern Pacific Railroad shops at 56th and the downtown turnoff at Pacific, Highway 99 became Tacoma’s most colorful stretch of  roadway and roadside architecture. There was a turreted medieval castle guarding the Tillicum Toy factory, a colossal bright yellow lemon marking the Lemon Lunch restaurant just down from the XXX Barrel cafe with two gigantic root beer barrels on the roof and the Big Pump Gas Station which was a three story building shaped like a big gasoline pump accompanied by two outsized flower pots that outhoused the men and women’s bathrooms.

But the showstopper on 99, and the inspiration for Harry Elrod’s dance club, was the Coffee Pot Restaurant-one of those jumbo, slightly absurd roadside attractions that defies logic and defined the American highway system in the 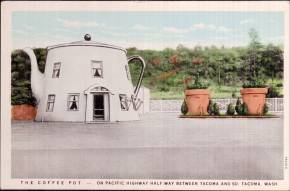 decades before post war freeways. In the company of oddities meant to slow 50 mile per hour automobile traffic with things like full size dinosaurs, petting zoos and home made museums, the Coffee Pot fit right in and signaled its commercial purpose in obvious if slightly over brewed terms. The whimsical Coffee Pot was two stories high and 30 feet in diameter with a spout, handle and top knob. It was the creation of partnership between an animal doctor and a display designer who made his living creating parade floats, animated Christmas window displays and theatrical exhibition sets. The veterinarian, Dr. Otis G Button bought the property in 1929 for 10 bucks and then went along with the idea of his new neighbor and designer, Bert Symser, to build a giant coffee pot in pieces and then put it together on the highway between Bert’s art deco motel and the Big Pump flower pots. The Coffee Pot began serving hot coffee, donuts and blue plate specials in 1930. There was a persistent rumor during the last years of prohibition that stronger beverages were available through a secret door inside but in Tacoma that may have been one of the only things that wasn’t unusual about the place. 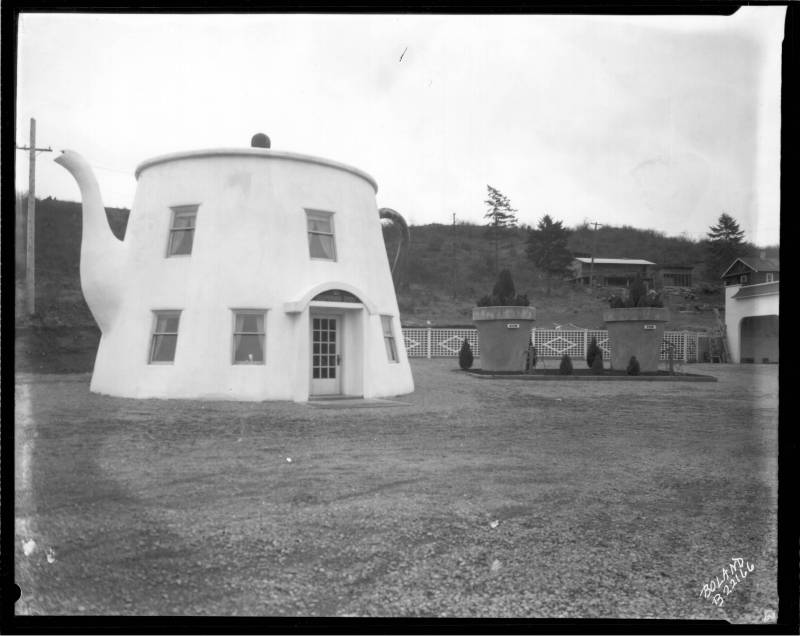 Button and Symser were better at making gigantic coffee pots than hot coffee.  During the 1930’s a series of proprietors ran the restaurant and lived in the apartment on the second floor. As the depression eased, prohibition ended and traffic grew on US 99 it became a favorite address for entertainment roadhouses like musician Max Frolic’s “dreamhouse diner” (1938) in Lakewood or the balloon hanger style Century Ballroom (1934) in Fife. Tacoma’s booming radio stations, big band music and the youthful charisma of Mayor Harry P. Cain percolated Harry Elrod’s  big vision for the big pot. 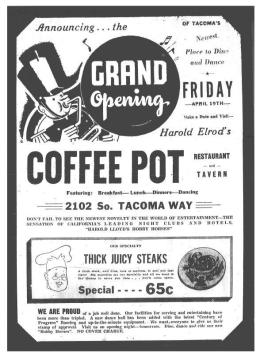 Elrod added a 50 x 30 foot masonry dance hall on the rear of the circular structure with a full stage, special “Century of Progress”(vinyl) flooring, seating for diners, and a new kitchen tripled in size. He also received the first legal liquor license for the institution and added a bar. Plans for the grand opening seemed to include everything, a big band, steaks for 65 cents and no cover charge. But the thing Harry featured most prominently in his advertizing blitz was “the newest novelty in the world of entertainment-the sensation of California’s leading night clubs and hotels”.

On that spring night in 1940 Tacoma turned off the highway at it’s most quirky roadside attraction and crowded onto the dance floor in a giant coffee pot-not to dance but to rock. Rock back and forth that is, on child size hobby horses that seemed somehow locally bred. A few months before, Tacoma had hosted Washington State’s Golden Jubilee with a year’s worth of pageants, parades and celebrity appearances. A few months later the city would cut the ribbon on a sleek new suspension bridge that would receive international attention as a modern marvel. There was every reason to party. 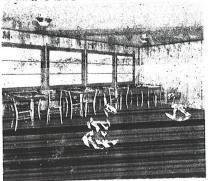 It’s possible the band singer stepped up to the microphone that night and crooned the latest hit song that would make the pop charts in 1941 by the Ink Spots. But that’s another story…… 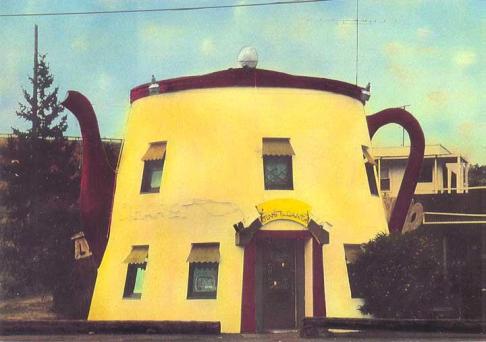