As figures in Tacoma’s musical history go, Leroy Ostransky was a giant. Murray Morgan estimated his presence at 6 foot 3 and about 250 pounds but almost everyone else sized him up by his piano playing, classical compositions and love of jazz. Ostansky’s book, The Anatomy of Jazz is one of five works he wrote on the subject and is still considered a standard. Along with jazz artists like Jelly Roll Morton and Red Kelly, Ostransky helped to link Tacoma with the jazz world, a connection that remains today in the internationally respected KNKX jazz format radio station.

at College of Puget Sound just after World War 2 and received his Ph.D. from the University of Iowa, a school better known for writing than music. And Ostransky was a prolific writer of both words and music. In 1952 he returned to CPS (later University of Puget Sound) as a composer in residence and stayed on the faculty teaching music for 30 years. His Symphony Number 4: American was commission for the U.S. Bicentennial and premiered by the Seattle Symphony on October 23, 1975 with full choirs from CPS and PLU. That year Ostransky was named one of the twelve greatest teachers in America by People magazine.

Leroy also had a radio program called Oh Oh Ostransky where he sat at a piano playing music and charming listeners with his eclectic ear and occasionally shocking ideas about telling a good story. Among Leroy and his wife Natalie’s best friends were Murray and Rosa Morgan and together they made up a lively and colorful part of Tacoma’s culture during the second half of the 20th Century. Following Ostransky’s passing (while working on a book about jazz artist Charles Mingus) in 1993, , Murray Morgan wrote this reflection about the big man…..

Leroy came into my life 46 years and six weeks ago, in September of 1947. He was in the first class I ever tried to teach. It was here at CPS — as UPS was then known. It was a class called professional writing and it was held in one of those wooden buildings over by the old gym.

I was scared stiff. I’d never taught anything. My training was in journalism. I’d written two books and some magazine articles but they had just sort of happened and I had no idea how to tell someone else how to do it, except for the Red Smith dictum which I still have pinned over my desk: “There’s nothing to writing. All you do is sit down and open a vein.”

Three were five students in the class. Four guys just back from the war — or at least, like me, from the army — and a girl, who had to listen to an awful lot of war stories or a lot of awful war stories. One of the guys was Leroy.  And he was, as you know, remarkable.

He was big, very big. Six two or three or four, and weighed somewhere between 240 and 260, depending on whether he had had four or six dinners the previous day. His hair was long — at least long for that period — his clothes were to put it mildly disheveled — his smile would melt glaciers — he had a voice like a friendly cement mixer and the energy of a runaway nuclear reactor.

He saved my day. Time after time he saved my day. About five minutes into the class I’d have repeated every cliché about “write what you know.” I’d pause and Leroy would start reminiscing.

Leroy told us about growing up in a Jewish family on the lower east side. He told us about his father who had done time in prison and was running a speakeasy. He told us about making bootleg whiskey by mixing raw alcohol with water and burned sugar in the bathtub, bottling it — with the dark dregs being bottled as Ostransky’s best. He told some stories that would straighten the fibers in a pad of steel wool about street fights which excited Leroy’s pacifism. And he told us about he father’s determination to make him a violinist — not just a violinist but the second coming of Yehudi. About dropping out of school. About being a house painter in Baltimore. About goldbricking in the army.

That was just the first class he taught at CPS.

And about Natalie, whom he met and married in Tacoma. About Natalie, who channeled at least some of that turbulent energy. About Natalie who when the war was over said he should go to college. As he told it he asked what college. She said there must be a college here — the bus that goes by the house says College.

So he went to the end of the line — learned about the high school equivalency program at University Place — aced it — highest score they ever had. And came to CPS —

The Leroy Ostransky papers are held in the Archives & Special Collections at the University of Puget Sound, Tacoma. In 1991 he published Sharkey’s Kid: A Memoir. 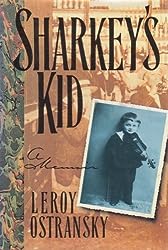