Nothing in this photograph from about 1887 remains today except the street configuration and the sloping hillside covered in optimistic wood frame buildings. In the lower left foreground is Tacoma first brick building on the corner of 9th and Pacific, named after Northern Pacific Railway director Charles B Wright. The rest of the landscape probably still smelled like fresh cut Douglas Fir and Western Red Cedar. The sprawling wood city in this view was little more than 14 years old. 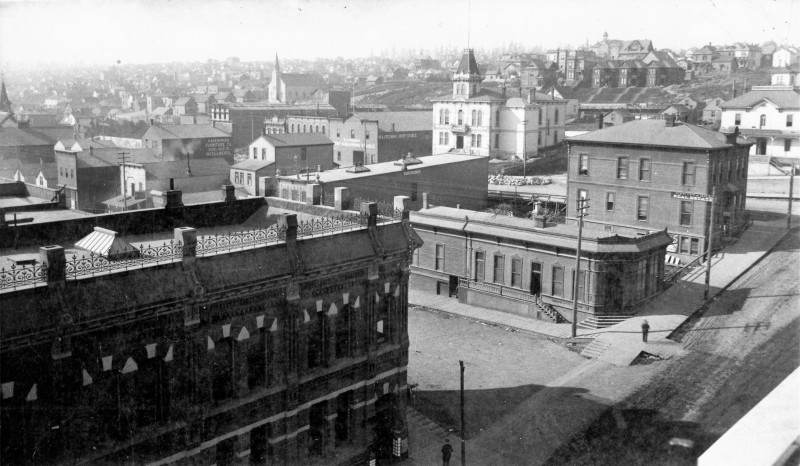 The crisp white building with the belltower in the middle distance was the Pierce County Courthouse destine to be replaced in just a few years by the monumental Richardson Romanesque landmark that was constructed between Yakima and Tacoma Avenues on 11th. The other white building to the right along Broadway was the headquarters for the Tacoma Land Company and parent Northern Pacific Railroad office, see THE FIRST

The dark two story, hipped roof building casting a summer shadow on the corner of 9th and Broadway was the Hewett and Hill Company real estate office. The NP was just completing the Cascade route over and through the mountains at Stampede Pass bringing travelers, speculators and adventurers directly into Tacoma. Everybody was buying and selling real estate in the metropolis that was about to appear around them.

And that’s what is prophetic about this particular photograph. It captures the site of the most frenetic city building to come just

months ahead of this photograph. The photographer is perched atop the five story Hotel Fife just finished on the Northwest corner of Pacific and 9th. Soon the NP land company building would be hauled away on log rollers and the majestic 2000 seat Tudor style Tacoma Theatre would begin construction. The block with the Hewett and Hill Building would be replaced with the imposing Gross Brother Store in 1888, rumored at the time to be the most costly commercial building in the city. In 1916 it was demolished and the Pantages Theatre was built in its place.

just behind the courthouse, you can see the steep front yards and hillclimb stairways to some of Tacoma’s first mansions. And beyond them, St. Joseph’s hospital, one of the many gifts to the city from Charles Wright, Tacoma’s most steadfast champion during the late 19th Century. It was Wright who enlisted Frederick Law Olmsted to plan the city in 1873 and when impatience and politics interrupted that ambition he turned to creating parks, schools, churches and fearless optimism in Tacoma. Wright, more than anyone else, was the force behind tunneling under the Cascades to reach Tacoma and it was his hand that would wipe away the wooden city in this photograph.