The trail of the unknown photographer I’ve been following through the 170 glass plate negative he created a century ago is twisting and turning a bit in time and place. His camera is moving and his work is hitting the road.

This group portrait of bakers dates from about 1920 and captures something of the well tuned team of bread and cake makers at the Model Bakery at the busy streetcar intersection of 38th and Yakima Avenue. The graceful arts and crafts style

brick building behind them was a pheonix of its day, replacing owners Gus and Thora Westerdale’s small bakery at 760 South 38th that was lost to an oven fire. Their new two story bakery opened in the spring of 1919 with a bank of hearth ovens, a corner facing retail shop for  fresh donuts, carry out baked goods and cake displays and a small fleet of delivery wagons. Thora and Gus lived upstairs and the kitchen crew met them and began work downstairs before 4 a.m. every morning. Like a classical music ensemble these people made 20,000 loaves of bread a week in addition to 465 dozen donuts, 300 dozen rolls and 250 cakes. There is a sturdy confidence in this wonderful portrait, perhaps even a suggestion of highly skilled affection among the women and men workers. No names but based on body language Gus is on the left with the hat and folded arms while Thora may be on the right side hatless in the white blouse. There’s no visible evidence of the picture taker but the orderly composition and play of light on the white aprons against the dark building to emphasize the faces is a sure sign of experience in making glass plate negatives.

The next photographs are equally skilled in the making and compelling in visual content but they also deepen the mystery because their location is unknown at this point.

This may be one of the chronologically last photos in the collection since the vehicles reflected in the shop windows date from the mid-to-late 1920’s. There is a youthful energy to three Italian merchants dapper in their ties, hats and perfectly combed hair. The prisms of a streetscape reflected in the glass suggest a playfulness behind the camera but any glimpse of the photographer is carefully hidden. Ciao!

More all weather roads were built during the 1920’s in Washington State than any decade before or since due to the adoption of a gas tax. The first gas stations were simple buildings and here is the proprietor of one, the White House at some unidentified corner beyond urban streetcar lines. A fresh bungalow neighborhood is  growing around it with streetlights, a tangle of power and telephone lines and paved streets and curbs. The clean and tidy provision of a women’s comfort station, fresh flowers and a garden hose have a neighborly feel confirmed by the open front door and grandfatherly presence of the owner. A story in a shot but no clue to the storyteller with a camera. Let’s drive on. 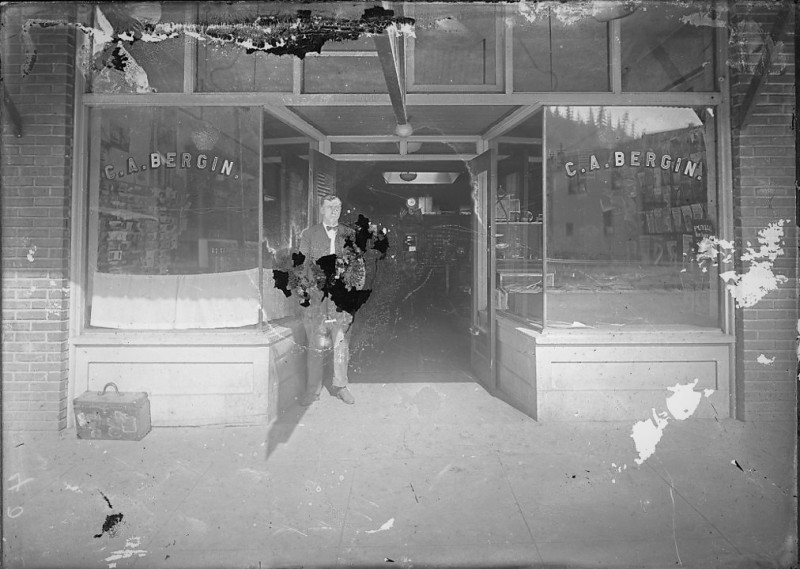 This shopkeeper portrait is from 1918 or 19 and shows confectioner Charles A Bergin in front of his Wilkeson candy store. At the time he was postmaster in the quarry town but in 1920 he and wife Pauline moved to Tacoma where they operated a confectionary shop at 815 Division near the new stadium at Tacoma High School. They went where the candy customers were but when this photo was taken our mystery photographer was still in the habit of leaving his camera case in the shot. There it is again in the lower left, clearer than before but still too hazy in the glass plate to read the labels. Wilkeson seems to have been a place the photographer returned to since there are several images in the collection. Here are two more from summer days before 1920.

Full store with ethnic canned goods fresh meats and even bananas. No camera case or clues however.

Some of the locals down at the Carlson Bar with flags flying, prohibition more of a suggestion than a law and still no reflection or evidence of our photographer. The Carlson Building survives today.

And here’s another portrait, damaged but unaffected, of an ice cream maker drying the salt from his ice barrels in front of his shop. Location unknown but there is that camera case and the pride of a small businessman on a warm day selling the perfect product. 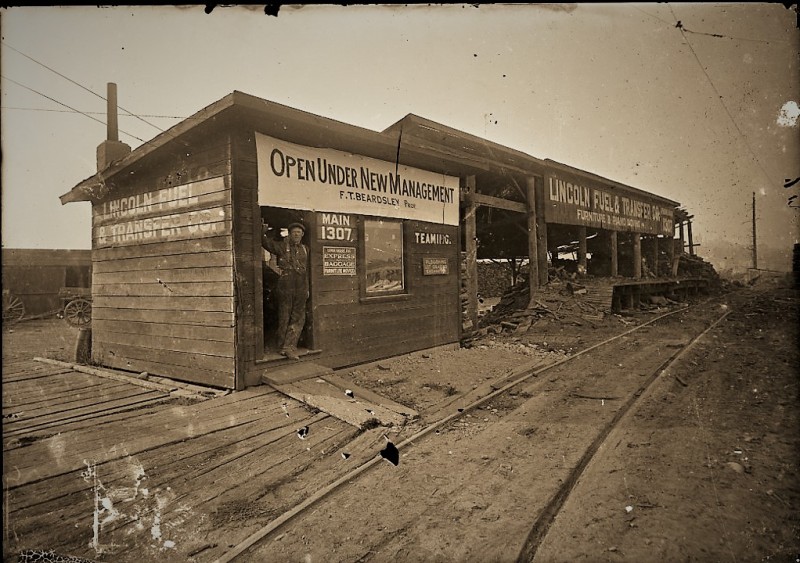 This trackside enterprise seems to be all about optimism and willing hard work. It has to be Mr. F.T Beardsley there in the doorway under the canvas banner sign that announces his new ownership. The ramshackled shiplap shed is surrounded by cord wood, wagons and a railroad loading dock evoking a time before motorcars when steam engines and horse teams did the heavy work. The cameraman seems to sense a good story in letting the round glass lens bend the rails and building away from the viewer like a train curving toward a vanishing point. This photograph is a masterwork and clear evidence that our picture maker was a professional. But where was his studio? How did he find his customers and how did they find him? And most elusive of all, what was his name?

More of the anonymous photographer’s glass plate images in the next post along with a few more clues, faces and puzzles hidden in clear sight. Anything anybody finds on this mystery is welcome. What am I missing?

There are a few studio portraits in the collection and we will look at some of them next. Here’s a charming example.

Part one of Clear as Glass ,

Thanks to Ed Nolan at the Washington State Historical Society Research Center and the Tacoma Public Library for help with this post.