The ongoing puzzle hidden in a collection of glass plate photographs from a century ago continues. Central to the mystery is the identity of the photographer but concealed in the images themselves are a series of stories and bits of information that help create a profile of our anonymous artist. As mentioned previously, our itinerant photographer operates on the lower economic end of the business world he is recording. With a few exceptions he is not making heroic status portraits of important civic leaders-the bankers, politicians and power brokers. For the most part, he is taking a single glass plate image of each customer at their respective workplaces, making them paper prints of the photograph and stocking away the precious glass plate negatives. The charm and small narratives that go with each photo are found in the forthright portraits of working people, their simple but proud establishments and the optimism displayed in simply having their picture taken. 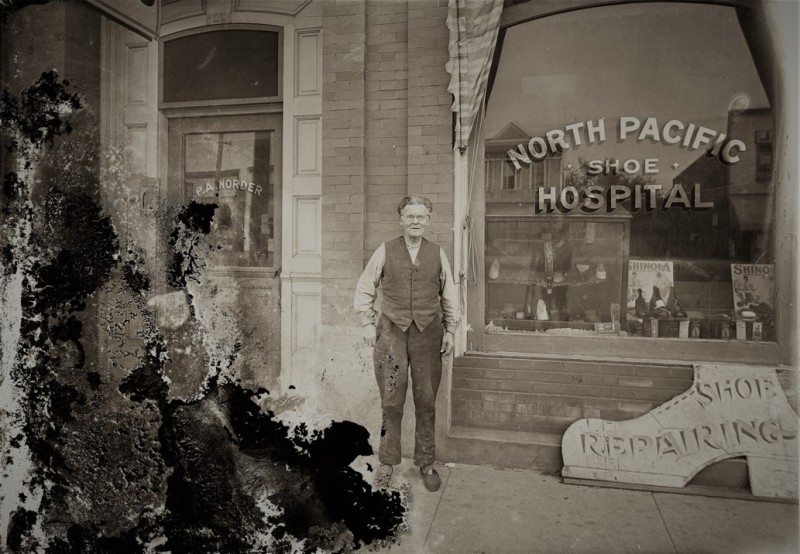 Per Norder immigrated to the United States from Sweden in 1909 when he was 57 years old. With his wife Emily and fifteen year old daughter Ann they found their way to Tacoma where Per started a shoemaker’s shop on South Union Avenue. From 1910 until his death in 1933, P. A. Norder practiced his trade as a cobbler moving in 1915 into the former North Pacific Bank Building and cleverly borrowing the name for his new “Shoe Hospital”. The sturdy little brick building is still there

on the South Tacoma Way streetscape missing its shoe shaped sign, striped awning and the gold leaf name of the proprietor on the front door. And if you look very closely, there is the reflection of our photographer and his camera on the storefront glass, too indefinite an image to see a face but another glimpse of the elusive mystery man.

Most of the shopfront photographs in the collection are taken at an angle to capture the full storefronts or groups of people in the compositions. The straight on photos are the ones to search for a reflection of the photographer, a optical trap where the intended glass plate photo captures an unintended clue about the appearance of the photographer. Here’s another glimpse of the image maker at work. 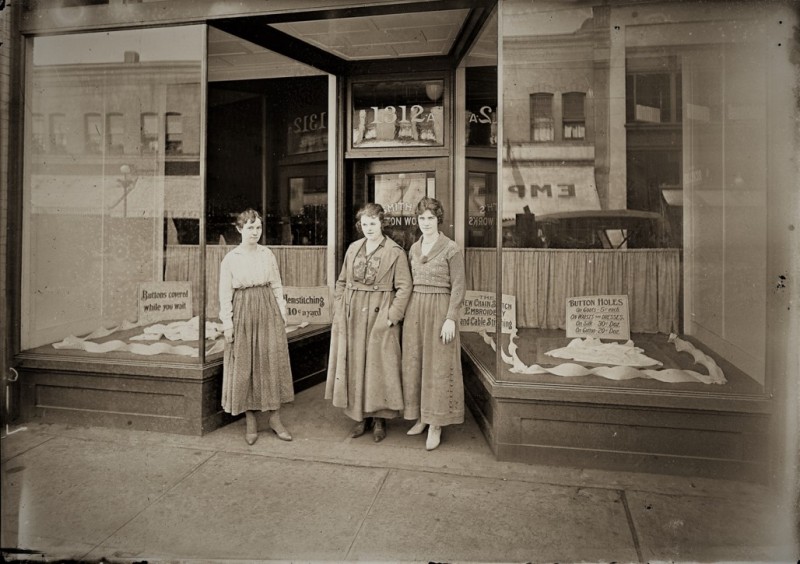 Smith’s Button Works operated at an unidentified location, probably in Tacoma where the buildings were brick, the sidewalks were concrete 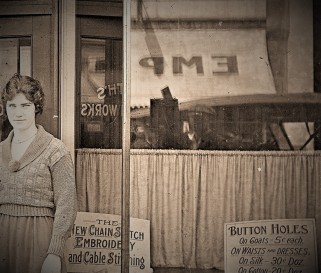 and high waisted fashions were not yet held together by zippers. When the three young women posed for their photograph about 1919 our photographer was there in the shot, box camera at eye level and a newsboy’s cap on his head. He’s using a cable shutter release so he can look directly at the expressions and details of the moment without viewing through the camera lens. He knows what he’s doing. 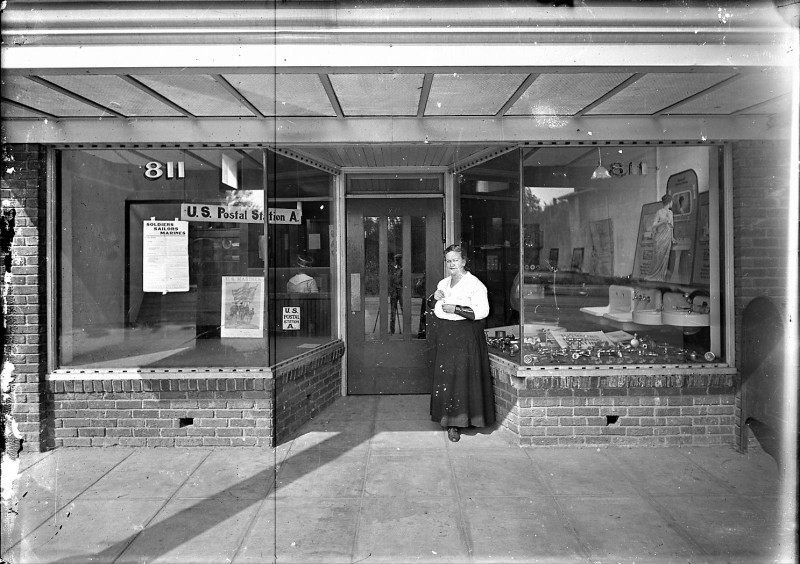 And here at the U.S. Postal Station on South 38th Street in 1918 or 1919 the shot was taken perfectly straight on reflecting the tripod and 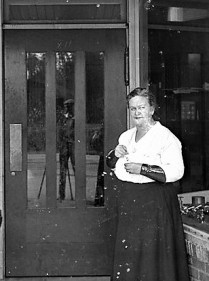 photographer in the glass panels on the door. According to Tacoma city directories, the postmistress is either Lulu Horsfall or Stella Titlow with spectacles in hand and dark cuffs to protect her white blouse from ink stains. The photographer is wearing his newsboy cap, a white collar on his shirt and even the streetcar rails on busy 38th are clear in the reflection but his face is illegible. One more clue delivered like an unsigned letter.

And now a perplexing but valuable reflection portrait of our photographer, seen off to the side of his camera as if watching someone else trip the shutter. The picture captures four men in front of an undistinguished storefront. A faint flag in the window suggests its about 1917 or 18, a large heating stove and bare light bulb can be made out inside but there is little else to indicate the type of business or location. 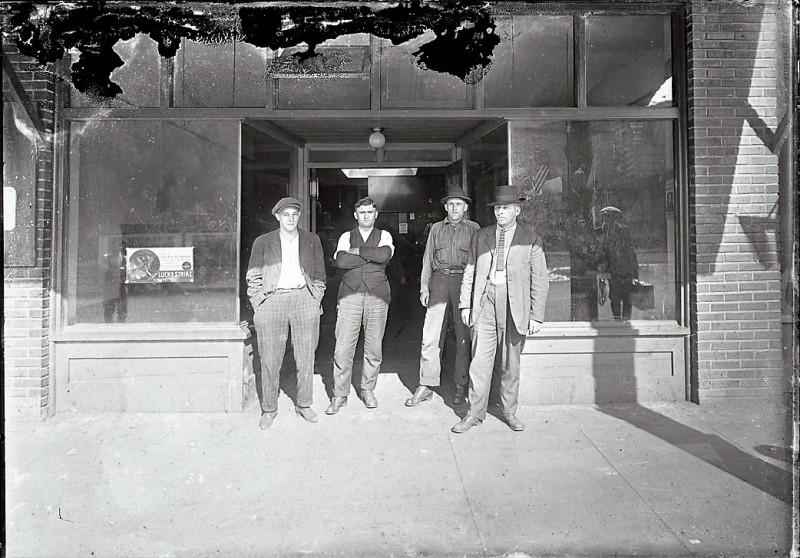 Of all the photographs in the collection this one 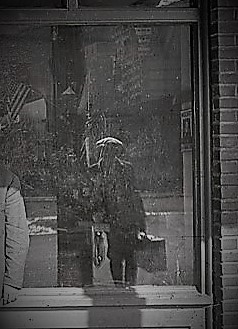 has the clearest and most complete reflection of the unknown photographer, there in his cap holding the familiar camera case that shows up on many of the other glass plate negatives. But who is taking the picture? Is there a sidekick or apprentice working with the cameraman? One step forward, one step back in this detective story.

As the search for clues continues here are the photos we are researching right now for location, identities, dates and possible matches with other known photographs. The illustrated beautifully the range of clients and subjects chosen by the photographer and may hold unrecognized clues to his travels, associations and perhaps his identity. See anything we might be missing? 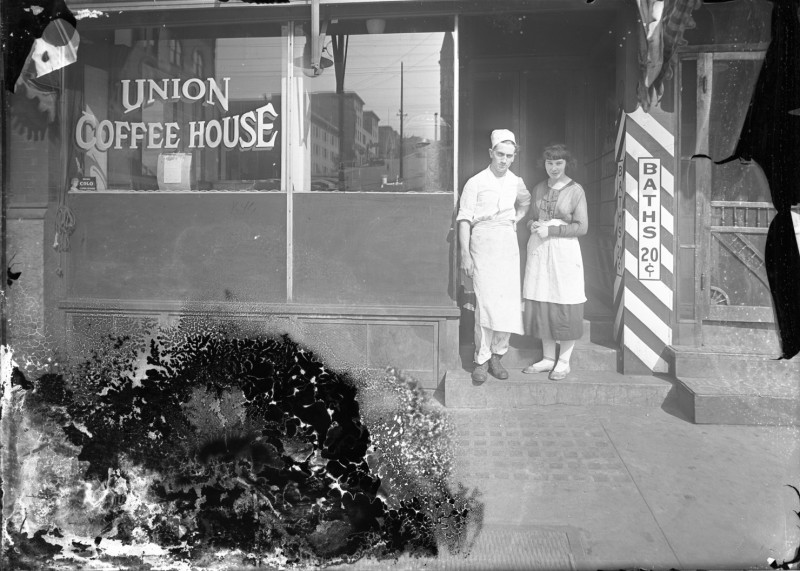 We suspect this coffee shop was on Union Avenue in South Tacoma but the hillside reflected in the glass is hard to match. 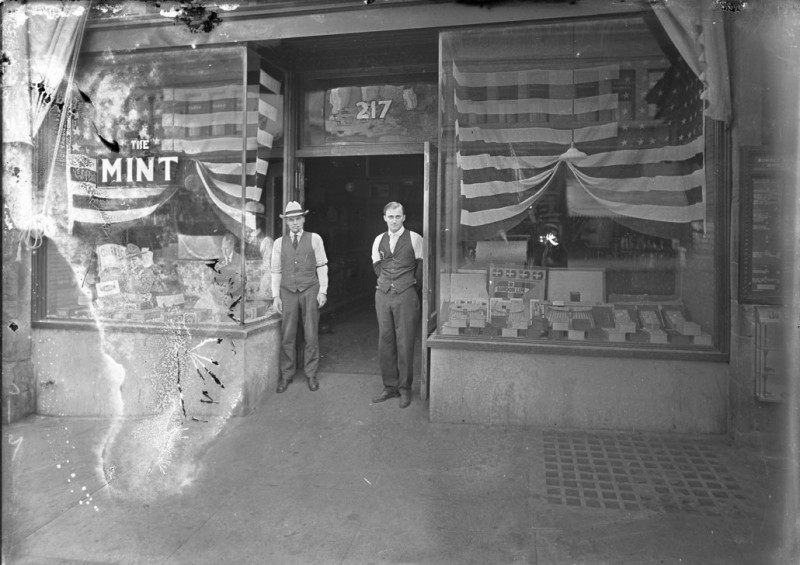 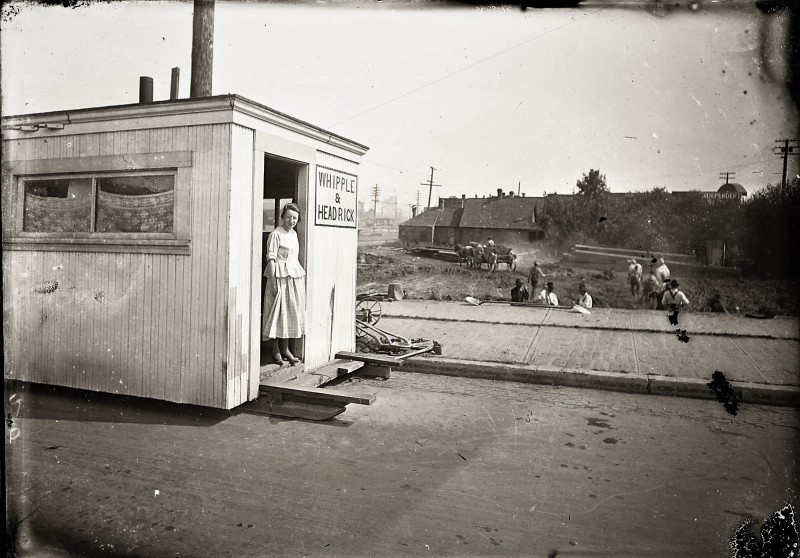 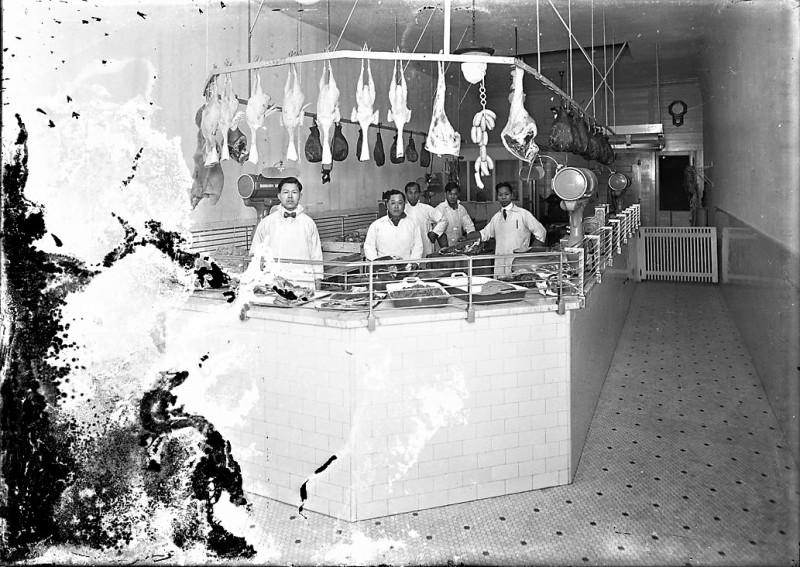 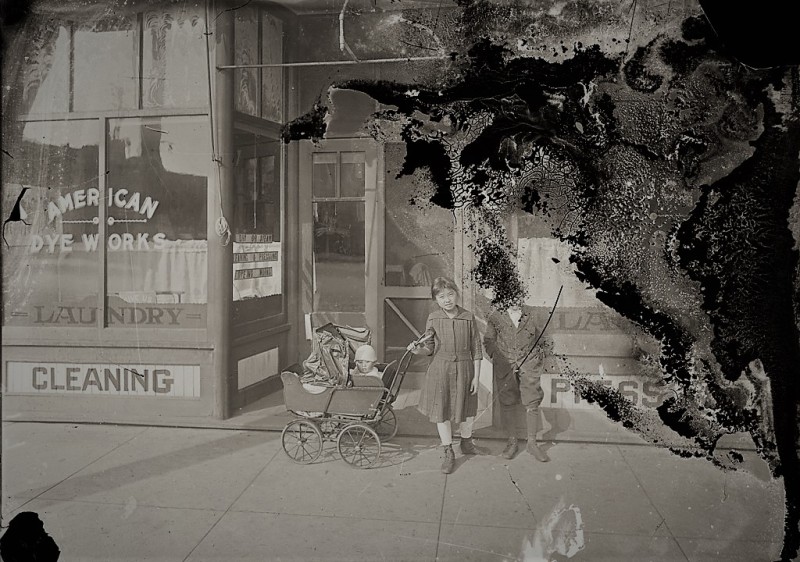 More to come as we post more from the collection and uncover more details about these amazing windows into a world a century away.

Thanks to Ed Nolan at the Washington State Historical Society and Feliks Banel for help with the question “Can you crowdsource the solution to a 100 year old mystery?”