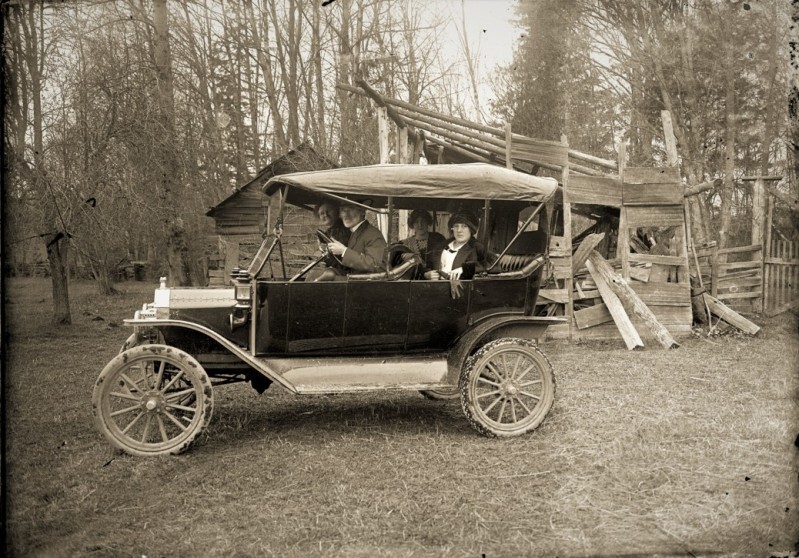 Back to the glass plate negatives from the 1920’s with their many questions and answers, their keen observations of a time a century ago and the hidden stories within. The holy grail in this ongoing examination of the 120 or so glass plate negatives is the identity of the photographer and maybe something about his biography. That secret still eludes me but this group of images follow a distinct pathway into the forest and a world of wood.

In this portrait and the next the photographer is following and older couple and two young women. From their fancy automobile and stylish clothes, they are people of means and the muddy tires on the car suggest they are wandering into unfamiliar territory. More miles of paved roads were built in Washington State during the 1920’s than any decade since but these adventurers are clearly not on one of them. Sitting in the car, they seem to be visiting the run down plank house and collapsing pole barn behind them, much more interested in having their picture taken than exploring the homestead ruins. Everything behind them seems carved from the woods. 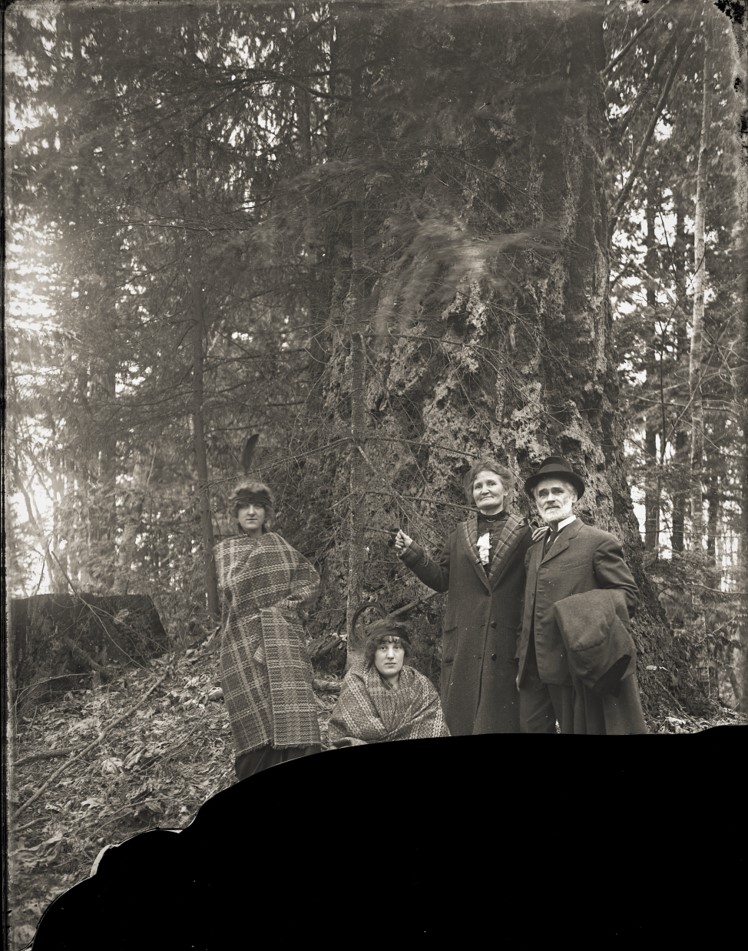 And here they are in the woods, the girls wrapped in car blankets like they don’t want to get too far from mechanical modernity. Its the trees that are telling a story in this photo. The group is posed on the root flare of a mammoth Western Red Cedar and just behind them is a stump of a first growth conifer. The older woman is gently holding the branch of new growth tree like it was one of the family.

I’m fairly certain that the photographer is a young man, a friend or relative, and I suspect from the feathers and headbands that the girls are playfully posing as native Americans. The edge of the Pacific Northwest forests, even after the ancient Douglas Firs, cedars and hemlocks were cut by hand and second growth was well under way, still had a primeval quality, a sense of powerful natural systems at work. 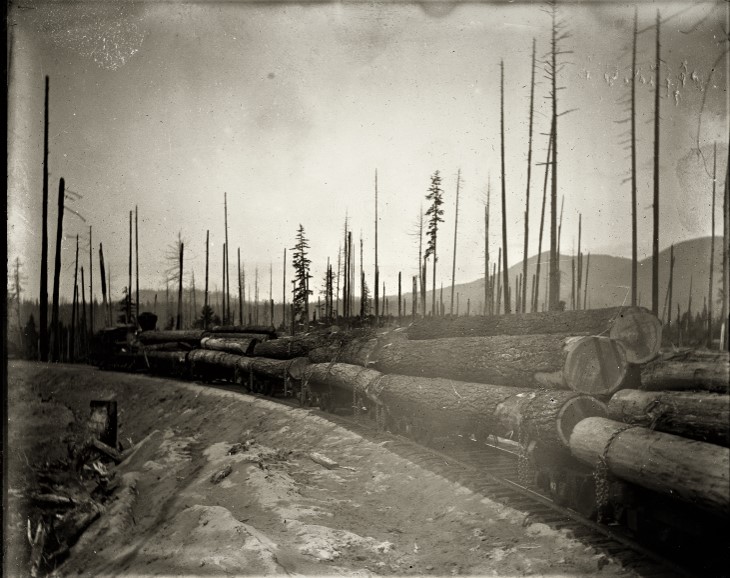 Where cities and farms took the place of forests, the cut and milled trees became the stuff of most buildings, houses, barns, fences and furniture. During the early 20th Century Tacoma lived off cutting lumber, milling doors and windows and manufacturing furniture. The construction material quality of old growth VG Douglas Fir for framing, cedar for roofing and hardwoods for woodwork was some of the best in the world. 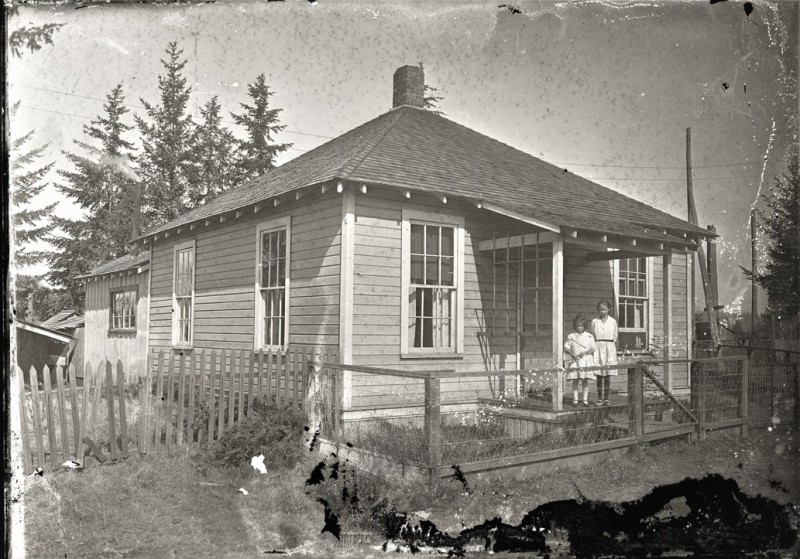 Carpentry was a profession for many but it was a basic skill for almost everybody. Outside the city, a family could buy framing lumber, milled dropsiding for the exterior, hardwood for floors, windows in double hung frames with glass, doors and hinges and cedar shingles all in a package. In 1920 a simple house like this might cost $250 and come with plans. All you need are tools and time.

If fancy wasn’t your cup of tea, a raw lumber house could be assembled with simple stud wall framing covered by board and batten siding, minimal windows and a shallow shed roof porch. Even the picket fence was wood.

And simpler yet was a board and batten plank shed with no foundation, home made fixed pane windows, a wood stove inside and wood bin out. 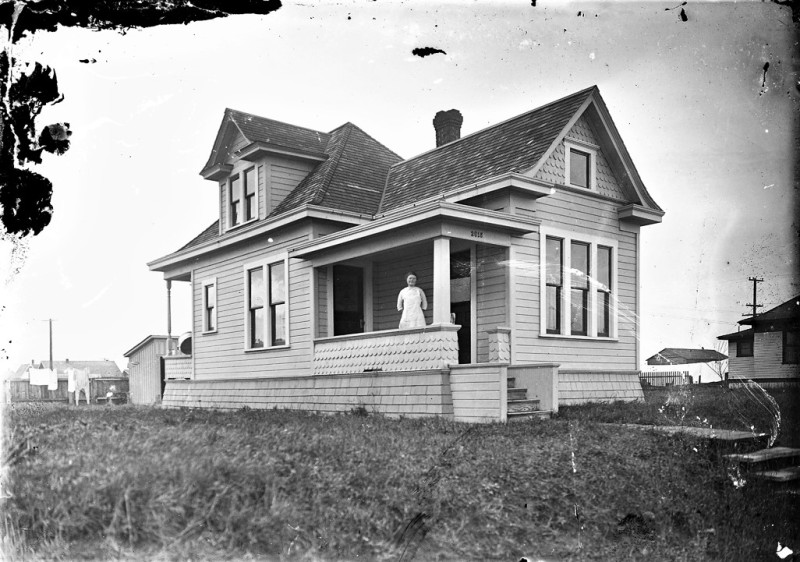 And in the city, where you had street addresses, indoor porcelain plumbing and next door neighbors, the houses were still made of conifer wood. The decorative shingles might be scalloped, the porch supports tapered or turned by a craftsman and the double hung windows might support large glass panes without mullions but for the most part you lived in a hand made wooden building.

A century ago the built environment was shaped in renewable material. We literally grew our cities, towns and buildings from native materials that expended a life cycle creating oxygen and absorbing carbon dioxide and then find a second chapter providing shelter and utility. It is fascinating to look at how we shaped and assembled the structures in our world a century ago using locally sourced renewable materials and skilled labor.

Today we build uniformly in concrete, steel and metals, petroleum based plastics and PVCs, and chemically derived adhesives, sealants and mastic resins. Seven percent of the carbon emitted into the atmosphere is estimated to come from the production of concrete used for construction, paving and even siding materials that replace wood. Vinyl used for window frames, ceiling panels, interior and exterior siding, flooring and casework is produced from petrochemicals, and most of the vinyl/PVC/plastic building materials are mass produced and transported by motor vehicle to the Pacific Northwest. 45% of the carbon emission in the U.S. comes from petroleum and construction related materials and their transportation contribute immensely to the problem. Sorry about the rant but keeping what’s useful, repairable and reusable in the built environment is just common sense. The photographs are a good reminder.

And finally this last tantalizing clue in the mystery.

I think the young man reclined with the cap is the same fellow in my bicycle group of images. I didn’t noticed it before but there were clues in the earlier photos suggesting the camera belonged to him. So I’m headed back to that group of images and the library. Things might be coming into focus.