If Tacoma’s continuing story was viewed from a single location, if time was passing geography at a particular point in the city it would be hard to find a better place to watch it all parade by than Pacific Avenue where it crosses 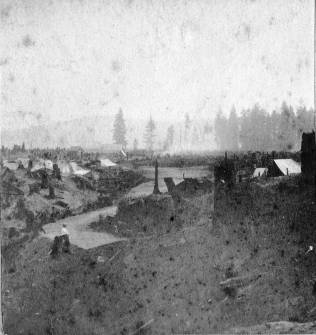 the Prairie Line. While Chinese contract laborers were laying the most Western tracks of the northern transcontinental railroad across the hillside that would become downtown Tacoma,  Frederick Law Olmsted was drawing out a system of boulevards and parks that he imagined as a plan for the city to come. As the year 1873 came to an end there was an intersection of the two efforts, a place in the mud and clear cut landscape where the just completed Prairie line crossed the sloppy, wagon wheel rutted road named Pacific Avenue. The action of a city coming to life was about to begin and the epicenter was obvious.

Olmsted’s idea for a grand gracefully curving boulevard got the railroad engineer treatment and ended up straight as a transit shot. The Prairie Line, that was intended to be so true and efficient in racing down to saltwater actually meandered along the topography before traveling its last mile on pilings that rose and fell with the tides. But the two pathways did cross like an X on a treasure map or an actors stage mark for a drama that was about to start.

For more than a century the rail line was the most important player in the crossing. Pedestrians, riders, wagons, carriages, streetcars and then in the 20th century automobiles, trucks and buses all stopped

and waited whenever a locomotive was passing on the Prairie Line. For decades there was a watchman’s tower at the crossing with a flagman there 24/7 to enforce the right of way, warn the civilians of passing trains and show little sympathy for the damage done to vehicles that got in the way. When Union Station opened in 1911 and the Prairie Line became double tracked, moving all passenger service to the east side of the boulevard, warning lights were installed for traffic on Pacific Avenue but the man in the box remained.

By 1922 the congestion was becoming fierce and collisions between trains and motor vehicles were becoming almost commonplace. There’s no record of a crash between a streetcar and a locomotive at the crossing which suggests that the hierarchy of “rolling stock” was well understood in Tacoma. But in time, the long delays for packed streetcars and horn honking automobiles caused by slow moving

freight trains and morning and afternoon  passenger service became more than just a commuter annoyance. In the 1920’s most of the passenger service was routed away from the Pacific crossing and the freight trains moved most of their warehouse district traffic to night time. By the mid 1930’s motorcars and trucks were winning the battle between the Prairie Line and PacAve. In the road war between rubber and rail a major battle was won by the motorcars when Tacoma’s streetcars were retired forever in 1935.

The early signal that automobile traffic was taking over Pacific Avenue and seizing the contested ground at the crossing was a gas station that appeared in 1920. It was a Mobiloil service station built just across the Prairie Line from the little flagman’s tower that had stood for decades. The gas station was fancy and fresh against the landscape of 19th century brick and stone buildings. Designed in a Colonial style with a Jeffersonian cupola it featured a bungalow with a polite drive thru fueling portico, four pumps and clean restrooms. It had a carport with hoists for repairs and “Mobilubrication” and a team of uniformed attendants that washed your windows and checked your oil while filling your tank with regular for 20 cents a gallon. It was all 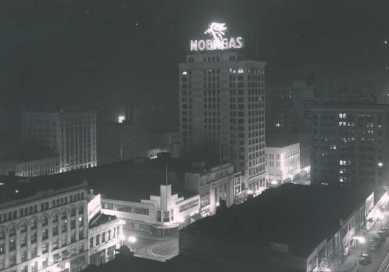 In 1939 work began on removing the last streetcar rails on Pacific. Not surprisingly they were embedded in the place where city rails met the transcontinental tracks of the Prairie Line. Tacoma was hosting the 50th birthday of Washington’s statehood that year and ironically they wanted the archaic streetcar rails gone so the city’s most important boulevard could be repaved and smooth for the parades and tour buses. The crossing was given over entirely to the excitement and street traffic of the Golden Jubilee and the Prairie Line with its lumbering freight trains was largely ignored. 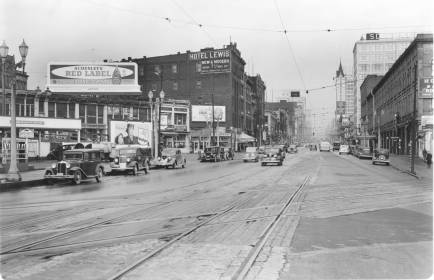 Before the rails were pulled 1939

The onset of World War Two reactivated the Prairie Line since it was the most direct route to the waterfront. The military and wartime

industries trumped automobile travel and Pacific Avenue began coming to a halt several times a day for trains from Fort Lewis carrying troops and the urgent stuff of wartime. But it was the last gasp of railroad dominance at the crossing. In the postwar years Pacific Avenue became a thoroughfare leading to U.S. Highway 99 North and South, Mt. Rainier National Park, the growing suburbs and then in 1956, Interstate-5. “Nez” DuCharme & Sons remodeled the Depot Gas Station in 1950 and then again in 1954.

The last regularly scheduled passenger train out of Union Station to cross Pacific left in 1955 on a half full run to Grays Harbor. It was winter, snowing lightly and nobody really noticed. In the years to follow traffic fell off on Pacific Avenue as the downtown struggled and the railroads faded. Union Station was abandoned. The warehouse district became a cold stone and masonry ghost town lined up along a seldom used rail line. The crossing became irrelevant.

But times change and memory serves. By 1990 Union Station was being restored as a Federal Courthouse surrounded by museums and cultural institutions. The University of Washington reactivated the warehouse district and rediscovered the Prairie Line just in time to realize that it was once again conflicting with traffic on busy Pacific Avenue. In 2004 the Northern Pacific Railroad stopped operating trains on the Prairie Line and sold the warehouse section to the University of Washington. But the rubber didn’t win the road war at the crossing. Motorcars were not the reason the Prairie Line was conceded to traffic on Pacific Avenue. Eighty years after the tracks were torn up the streetcars were back. Rail won at the crossing.