The legendary photographer and mountaineer Asahel Curtis was a Tacoma partisan in the debate over the name of the Mountain during the early decades of the 20th Century. Sometime in the early 1920’s he entered into a partnership with the candy-makers at Brown & Haley, first doing publicity photos of the production of Almond Roca and Mountain Bars. Then in a stroke of whimsy and marketing style, the candy makers and the picture maker launched a collaboration in confectionery packaging. Starting sometime around 1920, Brown & Haley began

selling their premium chocolates in elegant red cedar boxes with wood-burned branding and inset photographs by Curtis (most of them showing the Mountain). In 1919, the candy company moved into the transformed shoe factory on East 26th Street in Tacoma that has remained its manufacturing facility ever since. The earliest cedar candy boxes appeared after the move but the exact date of the first boxes is lost in the sweet fog of legend.

The one pound cedar boxes became a trademark for Brown & Haley and a bond of friendship and commercial success between Asahel Curtis, Harry Brown and J.C. Haley.

The design of the boxes changed overtime, or perhaps were made in different types. By the 1930’s the Brown & Haley type face became Art Deco in style and Curtis’ photographs began to capture scenes from across the Pacific Northwest. By the late 1940’s the clear red cedar boxes were marked in a script version of the Brown & Haley name and the Curtis photos became framed.

People remember the cedar boxes from the 1950’s but the extravagant little containers seemed to disappear from production during mid century. Those were days of expanded markets, international product popularity and greater production for the Tacoma candy company. But the boxes survived on bookshelves and in attics and garages all over the Northwest. They held letters, keepsakes, costume jewelry, Christmas ornaments, marbles, the small treasures of childhood and sweet memories of grandparents.

So what’s in your Brown & Haley cedar box? And which of the landscape photos of Asahel Curtis is on the top? 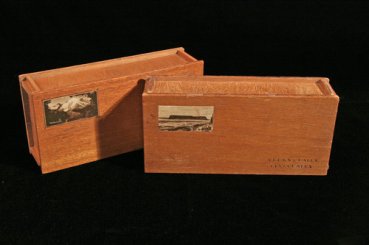