For anyone who has ever marveled at the exterior of Stadium High School but then ventured into the incongruous, somewhat disappointing, “modernized” interior there is better ending. Although architect Frederick Heath’s original interior is long since gone, another hidden chamber in Tacoma holds all the point in time drama, detail and  dimension of the designer’s mind. At exactly the same time he was designing the reconstruction of the Tourist Hotel as Tacoma High School in 1906, Heath was creating the Tacoma Temple of the Knights of Pythias in the center of the theater district at 924 Broadway. At the beautiful building’s heart is Castle Hall, a soaring, theatrical two story high room with rich Douglas fir paneling, massive scrolled brackets supporting a three sided balcony and classical entablature and murals ringing the space. During Andy and Joe’s reshoot of this September 24, 1924 cast photo from the play “Tahmamaiwis” presented by the Pythian Sisters, they realized a startling, almost inconceivable sameness. Not only was the architecture unchanged, the furniture, wall finishes, artwork and fixtures aligned precisely- after 89 years and one day. Everything changes but sometimes the pace of change is spellbinding. 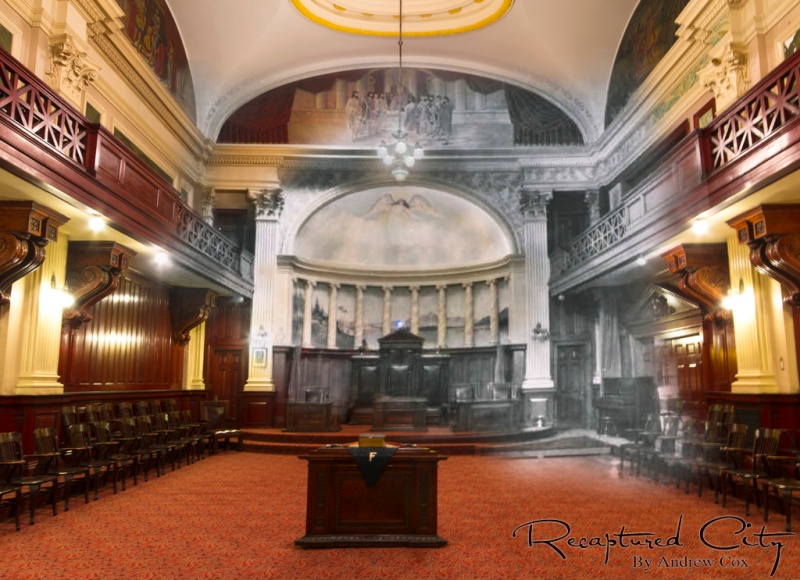 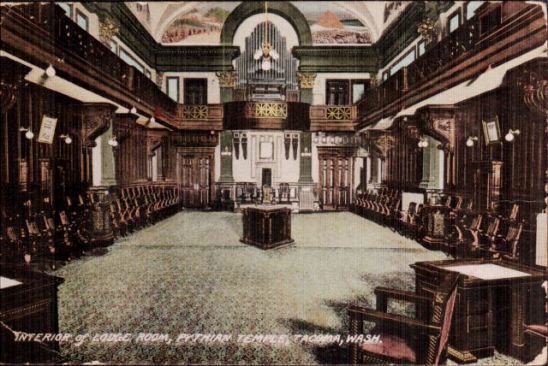 The Pythians have been opening the building up for community events and lectures and the landmark has become a clubhouse for the often pithy Cartoonists League of Absurd Washingtonians (C.L.A.W.). Once hidden and secret its now a place you can get into and never forget once you’ve been there. On my list of Great Tacoma Interior’s its right there with the Casablanca Apartments, Union Station rotunda and the Pantages.